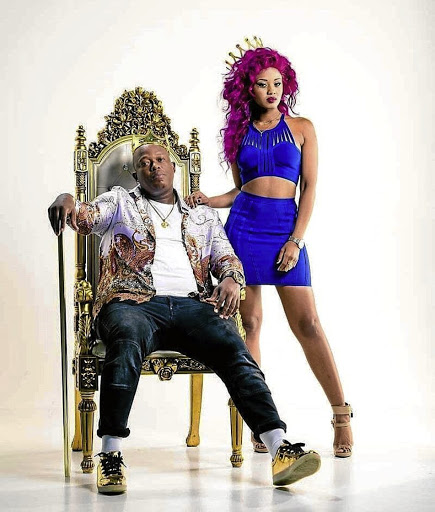 Mampintsha refutes Babes' claim that they broke up in March after he allegedly punched her.
Image: Instagram

An unrepentant Mampintsha says he is still in love with Babes Wodumo and wants to marry her despite allegations of assault level-
led against him.

"I love Babes wholeheartedly. I did not even know that she had dumped me, I heard from you [Metro FM] on Friday. That is why I [was engaged to] her because I wanted to take our love to the next level," he said in Zulu on Metro FM yesterday. During a live broadcast of The Drive on Friday with hosts Mo Flava and Masechaba Ndlovu, Mampintsha - real name Mandla Maphumulo - was accused of physically abusing Babes.

Babes said she broke up with the music boss in March after he had allegedly punched and kicked her to an extent of sustaining a broken leg at some point.

The Wololo hitmaker, real name Bongekile Simelane, said she had moved on.

Musician and record label owner Mampintsha has responded to allegations of abuse levelled against him during an interview on live radio on Metro FM. Radio host Masechaba Ndlovu confronted Wodumo about claims the Wololo singer had been a victim of abuse at the hands of Mampintsha, her ex-fiancé.

Mampintsha lost it several times during the interview yesterday and charged at Ndlovu, accusing her of meddling in his relationship.

He insisted that his relationship problems with Simelane were "no different from everyone else's".

"Ever since I started dating Babes there has been fights. I have been fighting for Babes and there are bigger problems than these. People are trying to ruin my name," he added.

The interview was marred by on-and-off rantings from Mampintsha and dismissive undertones as he indirectly ignored questions.

Mampintsha denied abusing Babes and said everything was exaggerated by third
parties.

"There were no punches involved or breaking of legs, hence you hear people asking where are pictures and where are medical records ... I am also shocked. Babes and I come a very long way. Babes was given to me by God," he said, sounding rather delusional.

"I am shocked that it's other people who are talking on behalf of Babes. If I had done what is said I did I am sure there would be pictures posted and we would have broken up a long time ago. We have our problems," he insisted.

Metro FM DJ‚ Masechaba Ndlovu‚ on Friday afternoon confronted Babes Wodumo on allegations of abuse that the musician had allegedly endured at the ...
Entertainment
4 years ago

The West Ink boss did not respond directly to questions asked but instead asked for prayers to help him and his "girlfriend" fix their relationship problems.

When Ndlovu insisted it was over, he dismissed her saying she spoke too much as "if you are my girlfriend".

However, he admitted posting pictures of Babes on her Instagram page and said this was because they were engaged.

Babes had said, in the Friday interview, that Mampintsha had posted the picture of her wearing an engagement ring and looking pregnant on social media last week.

He said he last spoke to Babes on Tuesday last week when she told him she was promoting her new single.

Twitter has been divided about how Masechaba handled the interview.
Entertainment
4 years ago
Next Article