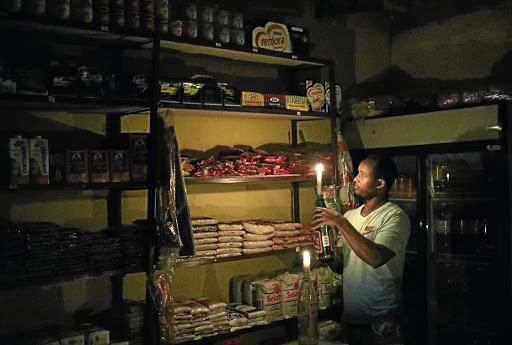 An owner of a convenience store, or spaza shop, picks an item for a customer as he holds a candle during Eskom's load-shedding.
Image: Siphiwe Sibeko/Reuters

Rampant load-shedding has had far-reaching effects, with its implications impacting on crucial provisions for people's security and health. Those using oxygen or sleep apnea machines and home dialysis equipment in the Nelson Mandela Bay area are terrified a lack of electricity could have life-threatening consequences.

Bay security companies have also warned that prolonged periods of outages are compromising security systems with "false alarms" becoming more frequent as battery back-ups fail. Alongside reports of households experiencing breakdowns of appliances such as fridges as a result of surges when power is restored, the outages have caused an unprecedented activation of alarms due to technical issues which in turn has affected response times.

Operations manager for Atlas Security in Port Elizabeth, Monty Montgomery, said load-shedding was "having a hell of an impact" on household security and security industry. "I don't think people were prepared for the impact that stage 4 load-shedding had. The security game is all about timing and responding to an emergency or an alarm as fast as possible.

"So when traffic lights are down and there is traffic congestion, this has a major impact on response times."

Montgomery has urged communities to be more vigilant, take more precautions and to get more lighting such as candles and solar-powered lamps in their homes.

Small enterprises were found to be coping with the additional security challenges by either closing their businesses during the blackouts, using generators or by using access control whereby only a few people were allowed into a store at a time.

Charnel Hattingh, marketing and communications manager at Fidelity ADT, urged residents to test their domestic security systems as a matter of urgency and to pay particular attention to the battery back-up systems. Hattingh said power cuts could also impact on fire control systems, meaning they need to be checked regularly and that the more frequent use of gas and candles could also increase the risk of fires.

President Cyril Ramaphosa says the government will go after people who stole money from Eskom, promising that “we will get our money back”.
News
2 years ago

Prominent Port Elizabeth children's activist and author Dianne Lang, who is extremely ill, has been put in a life-threatening predicament by load-shedding.

Speaking on Lang's behalf as she is too ill to communicate with the media, friend and well-known musician Ulagh Williams on Friday described a nightmare situation Lang is currently enduring.

"Due to load-shedding, she is unable to run her oxygen .... We are trying to get the public mobilised to donate towards helping to get the medication she needs from overseas and also to get our hands on a generator for them [Lang and her husband] to use. We are desperate ... she does not deserve to suffer this way."

Williams said Lang desperately needed continuous power supply due to her illnesses, and the lack of it was life-threatening.

Retired nurse Ryna Bakkes said she was exhausted after a week of stage 4 load-shedding. "I look after my mother who is 86 years old. She has serious heart problems and is on oxygen. She uses oxygen about 95% of the time." -
Additional reporting by Estelle Ellis