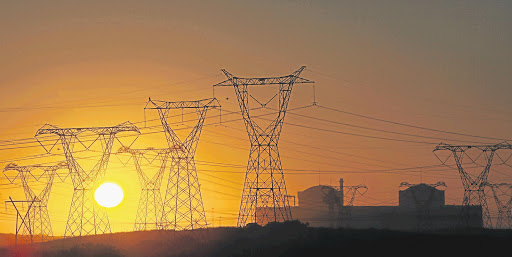 A view of the setting sun through the pylons of the Koeberg nuclear power station near Cape Town.
Image: ESA ALEXANDER

Energy experts have attributed the current load-shedding to poorly planned maintenance and a breakdown of Eskom infrastructure.

On Saturday morning Eskom announced load-shedding would move from stage 3 to stage 4 by midday after initially implementing stage 2 load-shedding.

"Due to the loss of an additional 900 MW from the Mozambique imports‚ loadshedding will move up to stage 4 from 12 noon‚" Eskom said in a statement.

This followed earlier confirmation that Eskom had moved from stage 2 to stage 3 at 10am.

“Eskom regrets that rotational load-shedding has moved up to stage 3 from 10am‚ due to the loss of additional power station units‚ which includes a reduction in imports from Mozambique‚” Eskom said.

Load shedding will move from stage 3 to stage 4 by midday on Saturday, Eskom announced.
News
3 years ago

“Eskom is not generating enough energy so when we do our planned maintenance‚ we don’t go into load-shedding. We are short of nearly 20‚000 megawatts on any given weekend. Breakdowns take away 14‚000MW. We only import 1‚000mw from Mozambique…poor maintenance led to this‚” Yelland said.

Energy Intensive User Group’s Shaun Nel also attributed the current load-shedding to plant failure. “Our energy pumping facilities are always breaking down either due to poor maintenance or failure to supply coal or diesel‚” Nel said.

Both Nell and Yelland called on Eskom and government to look for alternative energy providers that could supplement the country’s shortfall.

Earlier on Saturday Eskom announced it would be implementing stage 2 load-shedding from 8am to 11pm due to a shortage of capacity and a loss of additional generating units.

However just after 10am the power utility alerted consumers via Twitter that due to a loss of additional capacity‚ including imports from Mozambique‚ load-shedding would be kicked up to stage 3.

"The situation remains tight and volatile and we may have to implement further load-shedding should the situation deteriorate. Depending on how quickly we can restore power‚ this may impact the prognosis for tomorrow and next week‚" the power utility warned.

Eskom said stage 3 called for 3‚000 megawatts (MW) to be rotationally load-shed at a given period.

Eskom continued with load-shedding on Saturday.
News
3 years ago

“Load shedding is conducted rotationally as a measure of last resort to protect the power system from a total collapse or blackout‚” the power utility said.

On Thursday‚ Eskom said it would cut electricity after a unit at its faulty Kusile power station tripped‚ adding to a shortfall of generating capacity.

Eskom‚ which supplies more than 90 percent of the country's power‚ has suffered a series of unplanned breakdowns at its creaking coal-fired power station fleet which limit its ability to power the country.

Kusile is one of two new multi-billion rand power stations which have suffered massive cost overruns and technical problems.

On Thursday‚ Eskom said in a statement that it planned to cut 1‚000MW on a rotational basis countrywide from 11am to 11pm‚ a month after implementing some of the worst power cuts in several years.

Eskom's problems are a major challenge for President Cyril Ramaphosa as they have shaken investor confidence and threatened to stymie efforts to rekindle growth before a parliamentary election in May.

Ramaphosa's government has promised to inject R23-billion a year over the next three years to shore up Eskom's balance sheet and appointed a team of experts to come up with a plan to improve the firm's operational performance.