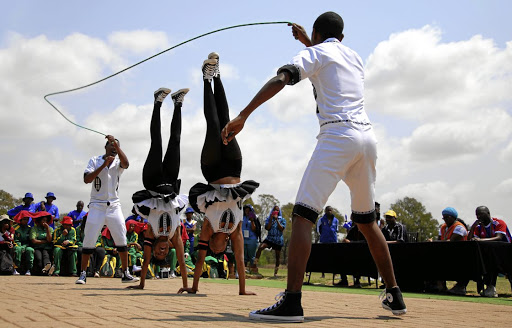 KZN twins Thabile and Thabisile Jama got the judges' attention during the games.
Image: Sandile Ndlovu

Way back before PlayStations and Wi-Fi, the switching on of streetlights as the sun set would be an indication for kids to go home.

During the day kids would spend hours jumping rope, throwing balls over a stack of cans while trying to catch each other in a game called bathi, throwing sticks and collecting stones to play diketo and playing hopscotch.

Obesity was never an issue as these games, carried down the generations, ensured children were active throughout the day.

Today, the department of sport and recreation has managed to preserve these games in the form of the Indigenous Games Festival which is held every September, to celebrate Heritage Month.

Mickey Modisane, chief director of communications at the department, says that indigenous games are defined as physical and character-building activities that originate in various communities of South Africa. They are cultural play activities that are distinct to each culture in SA.

More than being fun, they build on teamwork and bring people together.

Each game has specific skills and rules aimed at promoting certain African values. Aside from the physical prowess, it builds communication, cognitive, and strategising skills.

Research done by the University of Johannesburg on indigenous games says we have approximately 500 games in South Africa.

The department started by formalising eight games. There are many different names given to one game because of various cultures and languages across the the country.

This year, the festival will take place at the Seshego Stadium in Polokwane, Limpopo, from September 23 to 28.

Modisane says celebrating these games was first introduced in 2001 and that the national development plan purports that citizens need to be more physically active.

He also emphasises that it's important to preserve the games because they are not only childhood games - but are an important part of the African culture.

"The revitalisation of the indigenous games is an initiative to build a diverse society with a common national identity, celebrating our shared heritage," says Modisane.

Before the day, provinces are urged to register their teams to take part in a number of games.

But, he emphasises, all are welcome as communities are given an opportunity to be taught how to appreciate the rich history of the cultural experiences as curated through the games.

In 2008, the eight official indigenous games were displayed in Busan, Korea, at the Tafisa World Sport for All Traditional Games.

Besides the games, the festival also celebrates African cuisine and showcases an array of different cultural entertainment.

"There will be a cultural street carnival which will be taking place during the opening of the games followed by a cultural festival, traditional food cooking competitions and a fashion show on selected days," says Modisane.

He maintains these games must be preserved in order to get in touch with our roots, and embrace our Africanness in all avenues of our lives.

Tennis has never been the same since Serena Williams hit the court.
Lifestyle
3 years ago
Next Article