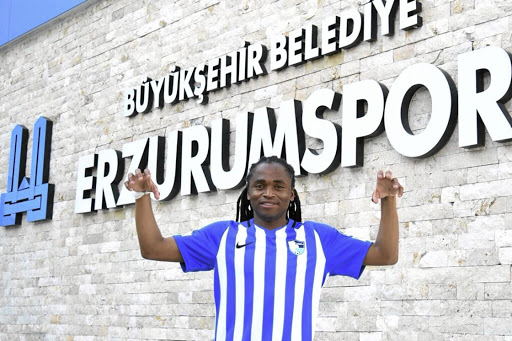 Siphiwe "Shabba" Tshabalala says although it seems like it took a lifetime, his dream of playing overseas has finally become a reality.

The local legend, who dedicated almost 12 years of his life to Kaizer Chiefs, received a hero's welcome when he arrived in Turkey last week.

The midfielder played his first game for new club Erzurumspor this week.

In fact, he feels like he is more of a legend that side than he was here.

"People this side have been amazing since I arrived, very loving and excited that I joined the team and they will get to watch me play with their naked eyes. I think I'm more famous this side."

He says proudly how he has reached milestones, broken records, won awards and has numerous accolades behind his name.

Tshabalala has played 372 games for Chiefs and scored 58 goals and was honoured as the Player of the Season at the club's annual awards ceremony last year. He also scooped all the club's awards at the end of the 2008-2009 season.

For the national team he has earned 89 caps. As the Bafana Bafana vice-captain, he won The Sports Personality of the year award as voted for by the public at the Gauteng Sports Awards in 2010.

"It was not easy at all and I sacrificed a lot, I faced rejection. I was told that I'm not good enough but I endured. I let my hard work, dedication, perseverance and passion keep me going. I am not bothered by the naysayers; I know where I am going."

The dream was always to be one of the best footballers in the country, play for Chiefs, represent SA and play abroad.

As a child he dreamt of becoming a chartered accountant but football was in his genes. Tshabalala joined his first club, Phiri Junior Birds, at only eight years old.

He was always proud that the game helped him purchase a house for his parents and also pay for renovations on his grandmother's home. Family, he maintains, is his backbone and support structure.

"It is also an emotional transition. Re leboga Modimo le badimo [we thank God and our ancestors]," says the soccer player.

Born and raised in Phiri, Soweto, Shaba, who turns 34 later this month says it's only been just more than a week but he is enjoying his new home, which is the east side Erzurum province of Turkey. "It's a small city with a population of about 500000," says Tshabalala.

SuperSport United’s veteran midfielder Reneilwe “Yeye” Letsholonyane has said that Siphiwe Tshabalala’s belated move to Turkey at 33 must serve as a ...
Sport
2 years ago

Married to former Miss SA Bokang Montjane, who he has a son with, Tshabalala sadly had to leave them behind.

"At the moment they are not here, we have businesses in SA and my wife will be taking care of that. I sat down with her and we discussed this deal and she was very supportive and gave me her blessings. I am blessed to be married to a woman who dreams my dreams and not only that, she is my prayer warrior as well and I'm blessed to have her. This deal came at the right time. God's timing is perfect," he says.

And he doesn't plan to make Turkey his permanent home.

"Maybe three years... but we will see. I'm looking forward to this new chapter of my story and I believe it's gonna be a very good story to tell," quips the shy star.

Tshabalala says it won't be so easy as he already misses his family and friends, as well as his beggar friends at the robots.

His focus is to impress off the field too by teaching the locals about his home, people and culture.

SuperSport United’s veteran midfielder Reneilwe “Yeye” Letsholonyane has said that Siphiwe Tshabalala’s belated move to Turkey at 33 must serve as a ...
Sport
2 years ago
Next Article