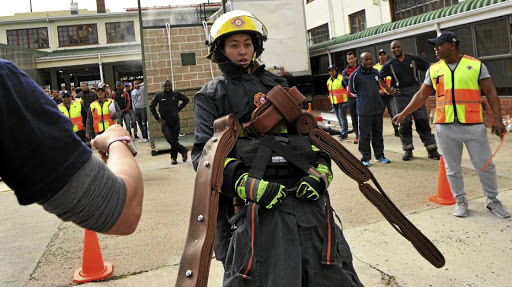 Baigum Abrahams is not fazed by the cumbersome regalia worn by fire fighters as she enjoys everything pertaining to her job.

The rookie fire fighter from Strandfontein was honoured with this award in the Toughest Fire Fighter Alive SA competition by Fire & Rescue International earlier this month.

She also won the overall title of the Toughest Fire Fighter, which saw 30 women as well as men compete.

Based at Mitchells Plain Fire Station in the Mother City, she had only been on the job for 13 days and had hardly trained to compete.

"I never had much time to follow a training programme as I would have liked to.

In between studying, classes and having a four-year-old son at home, I never had much time to prepare.

But I dedicated a week. After work I practiced dummy drags as I mostly struggled with that, and climbed the stairs of the civic centre, like twice...," says the 23-year-old.

Abrahams explains the rigorous activities as more than just tough.

"We had to drag a charged line, a hose filled with water, which makes it really heavy, across approximately 30 metres. Then we had to take a 25kg drum through a tunnel, do a dummy drag for 80 metres and scale a wall about four metres high. The third stage involved running five stories high with a 25l drum, wall up two hoses and run back and attach your nozzle to a monitor used in hazardous areas when fire fighters can't be exposed. 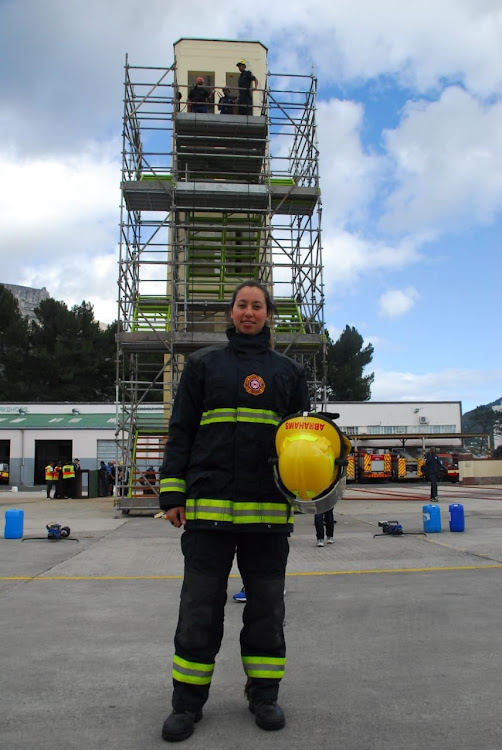 "Then we had to run up 25 stories at the civic centre," she says, trying to catch her breath.

But who in their right mind dreams of fighting fires for a living? Only the brave, it seems.

Abrahams says she was inspired by a few events, including almost burning her own home .

"I wanted to be an actress after watching Charlie's Angels. But I realise now I'm part of something great. I did life-saving for the past 10 years to give back to the community.

"But a few years ago I almost burnt our house down. I was sick and fell asleep while the oil was on the stove. I woke up to the crackling sound of the fire. I called the fire department and was inspired by how quick, fearless and efficient they were. I did job-shadowing at the Ottery fire station and then one year of seasonals before applying for the permanent post," says Abrahams.

A lover of sports, she participated in gymnastics as a child, then moved to swimming, surfing and running. She also breezed through the one-year physical training at the Fire and Rescue Training Academy in Epping, Cape Town.

Tea that stands the taste of time

Martin puts her signature on gourmet blends.
Lifestyle
3 years ago

"I guess it's because I maintain a healthy lifestyle and love physical activities."

She says her father played a huge role in her career choice.

"I grew up with my mom, since my parents are divorced. My dad has worked for the National Sea Rescue Institute for the past 37 years. Because of his guidance my sister became the first female station coxswain (skipper). We are in the business of saving lives," she says proudly.

Abrahams also hopes to not only make her community proud, but her son, whom she had at the tender age of 18.

"It was tough. Everything I do is for him. He is the reason I get through most days."

And she ain't scared of dying either.

"My dad always says everyone wants to go to heaven but no one wants to die. I've been socially and mentally conditioned from a young age to understand and accept the inevitable cycle of life. When it's your time, it's your time.

"Saving people is rewarding. Knowing that I make a difference is reason enough to go back to work everyday." she said.

She hopes to compete in the World Police and Firefighter Games next year.

Determination takes grade 4 pupil to the top.
Lifestyle
3 years ago
Next Article