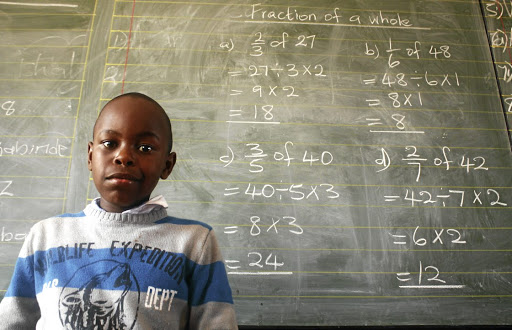 Ten-year-old Sibahle Zwane has the rare ability to calculate maths sums off the top of his head.
Image: Kabelo Mokoena

Sibahle Zwane is a 10-year old grade 4 maths genius and a businessman in the making through his amazing talent.

With a remarkable ability to work out huge numbers in his head, he goes around the Lehae neighbourhood near Lenasia making a quick buck from shocked strangers.

His mom Mbali Zwane says she was surprised when she saw videos of her son making money from his maths skills trending on Facebook.

"I couldn't believe he was doing this. One man sought my permission before posting it. Sibahle tells me he goes to the park, asks random strangers if they know their maths. And then he says 'well ask me'. When they throw big numbers at him - whether to add, subtract, multiply - he gets the answer spot on."

For every right answer, the young genius charges R2. "I've seen this boy come home with R100 or R200 notes which he then gives to his grandfather to keep for him," says Zwane.

We meet Sibahle at the Olifantsvlei Primary School in Eikenhof, and the little boy comes across initially as timid.

But, in the presence of his mom and principal, he soon settles down. He admits that he finds it difficult to be on the ball when he is under pressure as he struggles to tally the first sum we throw at him.

He bites on his fist as he works out the calculations in his head and after a few minutes, he happily answers all the sums correctly.

Zwane, a 28-year-old, single and unemployed mother of two, says his gift was first picked up when he was in grade 2, and his teachers told her he had a unique ability with numbers.

"If I had the means, I would send him to a place where they will be able to help him nurture this gift. I have applied for scholarships and hope something positive happens," she said.

Zwane said he is generally less focused on other subjects and often gets lazy doing them, but not with numbers.

Sibahle is unable to articulate how he does what he does. "I just see the numbers in my head. I like numbers more than anything else," said Sibahle adding he hopes to become a pilot one day.