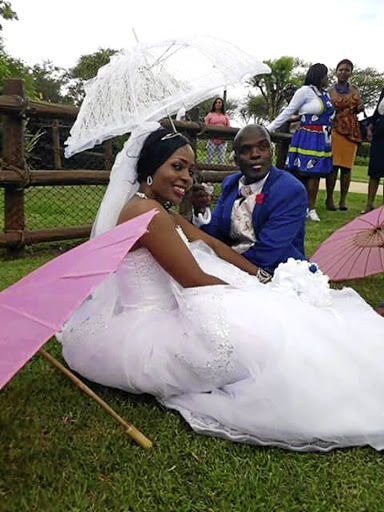 Nkuke Mabitsela had to get creative to get his wife's attention. When he first saw Toloki Teffo, he knew she was special.

Mabitsela even remembers the date he first laid eyes on her.

"It was October 27 2010. We met in Polokwane. We were both crossing the street at the robot and I took one look at her and I got cold feet."

He tried greeting her and asking if he could walk with her. But she said "No".

But, he wasn't about to be deflated.

"I then asked for a sip of her drink and she gave in," he says.

He claims he wasn't thirsty, but did it to buy time.

Mabitsela worked up the nerve to ask for her number, but she had conditions for when he should call.

"We went our separate ways but, hey, I couldn't stop thinking about her.

"I called her immediately to confirm the number and check how she would answer my call. I asked her to tell me when she finished her errands. She did, and we met the same day while in town."

Convict meets his dream woman behind bars.
Lifestyle
4 years ago

The man from Nobody Ga-Mothapo in Mankweng suddenly had a new zest for life.

They dated for about two years before he paid lobola and they were married five years later.

The Pedi couple wanted to have a contemporary wedding, but their parents insisted on doing things the "right way".

"It was a two-day event. On the first day at the bride's place, the groom was handed his wife by molamo [brother of the bride], says Mabitsela.

"After the blessing and exchanging of vows we went to capture our moment.

"We drove to Meropa Casino and Entertainment World for pictures, thereafter, we went back to makoti's [the bride's] place and continued.

"We then changed into our traditional attire and danced with our bridesmaids,

"It was a happy day, I hadtears of joy as my makoti was welcomed by my elders and spent the night with them."

He says the best part of their wedding day was when his new bride placed the ring on his finger.

The couple is now blessed with two girls aged 10 and four.