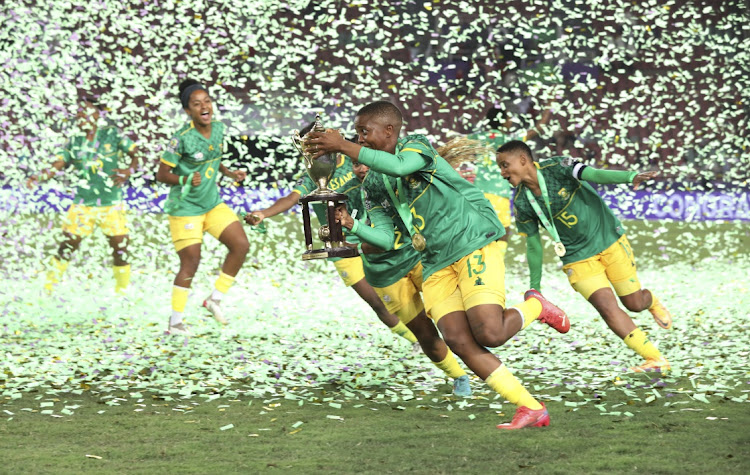 Advocates for transformation and gender equality have lashed out at the bonus pay structure for the senior national women’s soccer team Banyana Banyana.

The players will earn R400,000 each for winning the Women’s African Cup of Nations on Saturday after beating Morocco 2-1. This has caused an outcry, with supporters drawing parallels between what Bafana Bafana players got paid in 2019 for reaching the quarterfinals. Bafana players each received R520,000. At the time, Safa had promised each Bafana player R920,000 should they bring the cup home.

Banyana have also qualified for the Fifa Women’s World Cup 2023 and Safa is yet to announce how much the ladies would earn in that competition.

“This bonus structure is a slap in the face [of Banyana] ... and it is not in the spirit of gender equality and parity,” said Commission for Gender Equality spokesperson Javu Baloyi.

“We call on the Safa leadership and the department of arts, culture and sports to look at this issue as a matter of urgency. We cannot have Safa delegates getting excited when the Banyana Banyana win but the remuneration is not the same as the men’s senior team.”

The commission was scathing against Safa, saying leaders who are failing to address the gender-based pay gap should step aside. “Banyana have for years been qualifying for this tournament but the recognition is not the same as Bafana Bafana,” said Baloyi.

“Safa [officials] are in leadership and it is their responsibility to make sure women’s football is attractive. [If] they are failing, it is better to step aside and allow people who want to lead and make sure they will get money for Banyana. Sponsorships are enticed and they can come on board when Banyana are winning.”

Former Safa deputy president Ria Ledwaba said: “We have been speaking about Banyana and Bafana players being rewarded the same for a long time. It is important that we work towards achieving this. They should be rewarded for this victory, probably even more than what Safa promised because since the association made this commitment, they [Safa] will also receive prize money from CAF for winning the trophy. This will encourage the ladies and change their lives.”

“Women must be paid the same as men. We hope that the powers that be should look at and implement equal pay for equal effort that the teams have put. It is a principle issue and it will address the issues of the past ... where people were not treated equally. We call on Safa to make sure that Banyana get what they deserve,” said Matabane.

He said Safa was responsible for getting sponsorship for both senior teams, and in the past it was argued that Banyana were getting less pay because they were not winning tournaments.

He suggested Safa could explore the option of subsidising Banyana from proceeds generated from Bafana sponsorship. “Some of the money that is meant for men’s sport should subsidise the women.”

Matabane cautioned that failure to address the pay gap could result in young women athletes not considering football as a profession.

Parliament said it would continue pressuring sporting bodies and sponsors to address the current pay discrepancies in football.

“The presiding officers have also called for the CAF under the leadership of Patrice Motsepe to address the disparities in the prize money between men and women participating in their competitions. Motsepe has pushed for 150% increase in women’s cup prize money, so this shows that the same changes can be adopted back home.

“We will not rest as parliament until there is equalisation, justice and fairness for women’s sports,” said Mothapo.

South African Football Players Union president Thulaganyo Gaoshubelwe said the union recently tried to raise the pay gap issue with Safa but was told the issue was going to distract Banyana’s performance at the tournament.

Hildah Magaia scored a brace in the space of eight minutes to earn Banyana Banyana a 2-1 win over hosts Morocco in the Women’s Africa Cup of Nations ...
Sport
3 weeks ago

Motsepe warns Moroccans against use of lasers in Banyana final

With Banyana Banyana expected to be subjected to an unbearable atmosphere by the Moroccan fans in the Africa Women's Cup of Nations (Wafcon) decider ...
Sport
3 weeks ago

Hildah Magaia's brace propelled Banyana to a 2-1 win over the hosts Morocco at a packed-to-the-rafters Prince Moulay Abdellah Stadium in Rabat on ...
Sport
3 weeks ago

Banyana not thinking about big bonus

Banyana Banyana players may be a win away from pocketing staggering bonuses but they've collectively insisted they're not thinking about this before ...
Sport
3 weeks ago
Next Article