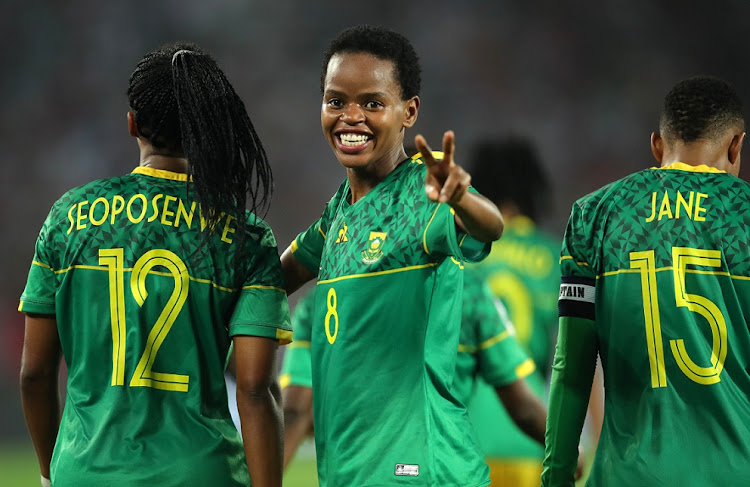 Banyana Banyana's Hildah Magaia celebrates one of her two goals in the 2022 Women's Africa Cup of Nations final against Morocco at Stade Prince Moulay Abdellah in Rabat, Morocco on July 23 2022.
Image: Samuel Shivambu/BackpagePix

Hildah Magaia scored a brace in the space of eight minutes to earn Banyana Banyana a 2-1 win over hosts Morocco in the Women’s Africa Cup of Nations (Wafcon) final and be crowned “Queens of Africa” at the Stade Prince Moulay Abdellah in Rabat on Saturday night.

With their gutsy victory in the final and professional conduct at the 2022 Wafcon, becoming the first team to win all six games, Banyana finally threw off their bridesmaids' tag having lost in five previous finals in 2018, 2012, 2008, 2000 and 1995.

SA took the all-important lead after 63 minutes from the boot of Magaia, who pounced from close range after she received a short pass from Jermaine Seoposenwe on the left.

For the opener, alert Banyana defender Bambanani Mbane looped a long-range pass upfield and it fell in the path of advancing Seoposenwe, who got the better of Yasmin Mrabet before laying the ball for Magaia, who did the rest.

Magaia increased the lead in the 71st minute when she took advantage of a defensive mistake by Morocco defender Elchard Nesryne after Karabo Dhlamini delivered a speculative ball into the penalty box.

Morocco pulled one back through Rosella Ayane who beat goalkeeper Andile Dlamini after she received a pass from Fatina Tagnaout after a defensive mistake by Banyana in the 80th minute.

For their gallant efforts the Banyana players are due to earn bonuses of R400,000 each that were promised to them by SA Football Association (Safa) president Danny Jordaan before they departed for the tournament.