Oliseh hails ‘one of Nigeria’s best performances in years’ 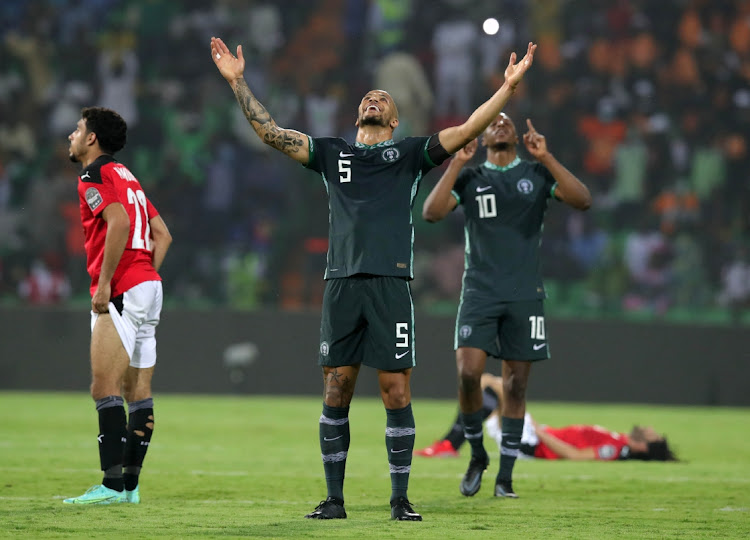 William Ekong of Nigeria celebrates a victory and Omar Marmoush of Egypt dejected during the 2021 Africa Cup of Nations Afcon Finals match between Nigeria and Egypt.
Image: Samuel Shivambu/BackpagePix

In a tournament thus far characterised by unconvincing displays‚ much-depleted Nigeria's dynamic 1-0 win against full-strength‚ record seven-time champions Egypt has caught the eye at the 2021 Africa Cup of Nations (Afcon).

Ajax and Borussia Dortmund midfield legend Sunday Oliseh‚ a teammate of Nigeria's stand-in coach Austin Eguavoen when a Super Eagles dream team dazzled at the USA 1994 World Cup‚ hailed the performance against Egypt as “one of the best in years”.

German coach Gernot Rohr was fired in December‚ and Nigeria Football Federation technical director Eguavoen was installed as caretaker coach for the Afcon even though Portuguese Jose Peseiro has been appointed to take charge after Cameroon 2021.

“Technically‚ tactically‚ physically‚ mentally and whatever positively you can think of‚ Eguavoen's Super Eagles I feel dominated Egypt‚” Oliseh tweeted.

“The best performance in recent years. At this rate we can be extremely optimistic my people. Moses Simon player of the match?”

“Egypt is not a weak side at all — it's a respected side coached by one of the top coaches in the world. And then one of the best players in the world [Salah] is in that team — so you cannot say it's a weak side‚” he said after the win.

“It's a very strong wide. We also worked so hard day in‚ day out‚ tactically and physically‚ and gave the boys so much confidence.

Watford midfielder Ismaila Sarr could yet be able to play for Senegal in the Africa Cup of Nations finals after a 'positive development' in medical ...
Sport
1 week ago

Max-Alain Gradel’s early goal was enough to secure the Ivory Coast a 1-0 win over Equatorial Guinea at the Africa Cup of Nations on Wednesday but the ...
Sport
1 week ago

Mali completed a 1-0 victory over Tunisia in a controversial Group F game at the Africa Cup of Nations that was ended prematurely by referee Janny ...
Sport
1 week ago
Next Article