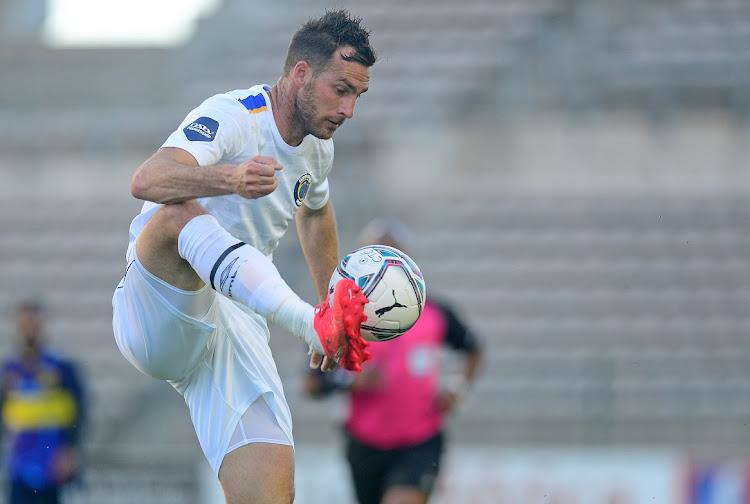 SuperSport United striker Bradley Grobler received a sanction from a disciplinary committee (DC) hearing last month for telling a referee in an MTN8 match that he was being targeted by match officials because he is white.

The sanction was confirmed by United CEO Stan Matthews, who said the incident was a moment of hotheadedness and speaking out of turn from a player who has generally had an impeccable disciplinary record.

After a plea agreement was entered into, a Premier Soccer League (PSL) DC on October 7 handed Grobler a five-match ban, three of which were suspended for two years, barring a similar offence.

SuperSport received a fine of R200,000, of which half was suspended.

The charge was Grobler had made discriminatory remarks to the match officials in United’s penalties MTN8 quarterfinal defeat to Lamontville Golden Arrows at Princess Magogo Stadium on August 14.

Grobler apparently told referee Abongile Tom at half time that he was being “targeted by SA referees because of the colour of his skin, or words to that effect”, a source close to the matter, who did not want to be named, said.

The return of striker Bradley Grobler from an unspecified injury, combined with the eight days they’ve been inactive before today’s game away to ...
Sport
2 months ago

Grobler was not sent off during the match. That was apparently because he made the statement at half time, and apologised for it soon after. It was taken into consideration in the DC that there was an element of remorse because Grobler had immediately apologised, and the club also apologised.

Grobler subsequently did not play SuperSport’s two matches last month post-October 7, a 2-0 home win against Baroka FC (October 16) and 2-1 away defeat against Kaizer Chiefs (October 24). He made his return as a substitute in SuperSport’s next match, the 2-1 away defeat to Royal AM on November 2.

Matthews said Grobler had also been fined internally by SuperSport, and the club has moved on from the matter.

“He got upset in the game and when they were walking off he had a chirp at the ref. he regretted it immediately and he apologised on the spot,” SuperSport's CEO said.

“He actually went into the referees' change room at half time to say, 'I'm really sorry, I didn't mean that'.

“But I am happy to say that he was wrong, and he was dealt with, he was punished and he served his sentence. As a club we're obviously disappointed that we had to miss him for two games and pay a monetary fine for a misdemeanour by a senior player.

“Because we expect better from all our senior players and want them to set an example for all the young players. We've got a young, impressionable team and Bradley's one of those players who is a role model and has the PSL Golden Boot, and someone we expect to lead the players in a positive way.

“He has had a fantastic career and never been involved in any form of nastiness on or off the pitch. He had just come back from an injury, and was obviously carrying a bit of frustration and wasn't getting the rub of the green in the game, and didn't handle it well.

“And it's an incident that we've now put behind us and Bradley knows that there's no room for that type of thing at the club.”

United indicated Grobler was not available for comment on the matter.