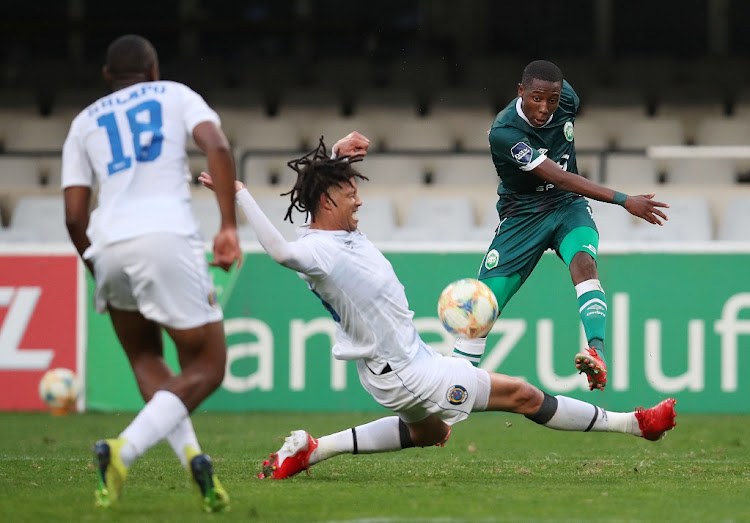 Tshepang Moremi of AmaZulu is challenged by Luke Fleurs of Supersport United in the DStv Premiership match at Kings Park in Durban on September 14 2021.
Image: Muzi Ntombela/BackpagePix/Gallo Images

Victory continues to be elusive for AmaZulu in the 2021-22 DStv Premiership after they played to a second successive 0-0 draw at home, this time to SuperSport United. The Pretoria team failed to take advantage of the home side playing the last 17 minutes with 10 men.

Benni McCarthy’s Usuthu, the runners-up last season, are yet to find a goal in three matches in the league and created too few chances against SuperSport on Tuesday to deserve a victory.

AmaZulu started better with attacking winger Tshepang Moremi and Tercious Malepe, who was shown the red card in the 73rd minute, combining well on the left.

McCarthy’s side, however, lacked the same threat on the right where former Kaizer Chiefs right-back Kgotso Moleko had Thabo Qalinge in front of him on the wing.

The game took time to open up, with both sides cagey and playing a glut of passes in their own half instead of taking the game to their opponents. The real chances only started to arrive towards the end of the first 45 minutes when Qalinge’s shot from close range was parried over the bar by the visitors’ gloveman and skipper Ronwen Williams.

Other than that there was little to report on a first half in which both teams lacked the courage to create clear-cut opportunities. Still, AmaZulu had the better attacks and might have at least gone to the break with a lead if they had been sharper in taking those half-chances.

SuperSport’s best chance of the first half fell to Iqraam Rayners whose shot was brilliantly saved by AmaZulu keeper Veli Mothwa after a good supply from Onismor Bhasera when AmaZulu were caught out of possession in one of their transitions on the left side of the pitch.

The restart of this match was delayed for more than 15 minutes as there were problems with the lights. But the long break wasn’t enough to galvanise either team's performance as they returned with the same lackadaisical momentum.

SuperSport coach Kaitano Tembo tried to change things upfront with the introduction of Thamsanqa Gabuza for Kudakwashe Mahachi at the restart and the move nearly paid off as early as the 53rd minute when Gabuza linked up with striking partner Bradley Grobler, who missed narrowly.

Tembo’s counterpart, Benni McCarthy, meanwhile, seemed preoccupied with fighting with the match officials on the sidelines, protesting some of the decisions that went against his side. Had McCarthy concentrated more on the game his side might have found ways of changing the outcome of this match.

McCarthy did make three substitutions, bringing in Samkelo Mgwazela for Limbikani Mzava in defence, Luvuyo Memela for Keegan Buchanan and Siphesihle Maduna for Moremi on the hour.

Still it was the visitors who created better chances in the second period, with Mothwa producing a good save off Grobler’s header.

The pressure was on Usuthu to at least get a point in this game when referee Thando Ndzandzeka sent Malepe off for a straight red card after a dangerous foul on Jamie Webber. Qalinge had to be sacrificed for a defender Mbongeni Gumede after Malepe departed.