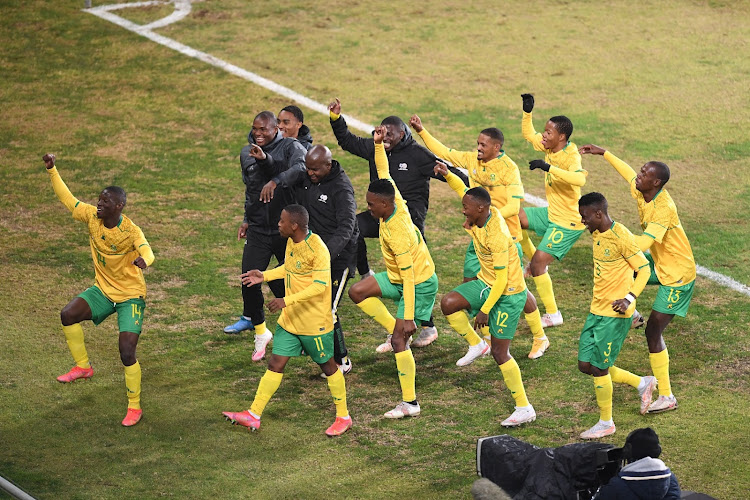 Bafana Bafana forward Bongokhuhle Hlongwane celebrates his goal with his teammates in the international friendly against Uganda at Orlando Stadium on June 10, 2021.
Image: Lefty Shivambu/Gallo Images

The new Bafana Bafana era got off to flying start after the largely inexperienced national team came from behind to overcome Uganda 3-2 in an international friendly in Soweto.

Bafana struggled to impose themselves in the opening exchanges and were given a rude awakening when winger Ibrahim Orit headed Uganda ahead in the 17th minute at Orlando Stadium after the SA backline failed to defend a cross.

Orit should have doubled the lead a minute later after robbing Nkosinathi Sibisi of the ball inside the Bafana half but his effort went inches wide of goalkeeper and captain Ronwen Williams’s goal.

Bafana, under the helm on the night of national team legend Helman Mkhalele, failed to have a single shot at goal in an uninspiring first half in their first match since their failure to qualify for next year’s Africa Cup of Nations finals.

But things changed in the second half after the introduction of forwards Thabiso Kutumela and Evidence Makgopa, who came in for defenders Nkosinathi Sibisi and Denwin Farmer.

The 22-year-old Makgopa managed the first shot at goal for Bafana. He then pulled SA level shortly after in the 62nd minute with his second attempt, a headed goal at the near post.

Fellow substitute Kutumela also got in on the act with an effort flashed at goal but it was another youngster in 21-year-old Bongokuhle Hlongwane who turned things around for the home team.

Maritzburg United forward Hlongwane put Bafana ahead in the 67th with a stunning curled effort with his left foot from the edge of the box that found the inside of the post and the back of the net.

Bafana started the match with seven debutants and a starting line-up consisting of only locally based players. Mkhalele was in charge on the bench as new head coach Hugo Broos was receiving his Covid-19 vaccination in native Belgium, and assistant Cedomir Jankevic tested positive for Covid-19 on Tuesday.

Bafana were so thin in experience that the entire starting XI had a combined number of just 40 caps, with Williams (18), defender Innocent Maela (10), and forward Lebohang Maboe (11) accounting for 39 of those and young Hlongwane one.

SA bizarrely had six defensive-minded players starting the match against a young Uganda side that is rebuilding following retirements of several key senior players, which led to a drab first half with no shots at goal.

But the withdrawal of two defenders and introduction of attacking players turned the match on its head with Makgopa helping himself to a brace on debut.

Despite being favourites, the odds were stacked against Bafana in the build-up to this match due to six withdrawals due to Covid-19 and injuries. Consequently the winning start can go have the young and inexperienced team, including the new coaching staff, believing in their processes.

Bafana were dealt a huge blow at the start of the week after the talismanic England-based forward Tau and midfielders Teboho Mokoena and Sipho Mbule were ruled out of the match due to Covid-19.

As if that was not enough, the Mamelodi Sundowns trio of centreback Mosa Lebusa and utility players Rivaldo Coetzee and Mothobi Mvala were later also withdrawn due to injury.

It left to Mkhalele as a lone instructor on the bench as the ex-Orlando Pirates winger also made a small piece of history becoming the first player from the celebrated 1996 Africa Cup of Nations-winning squad to take charge of a Bafana team.