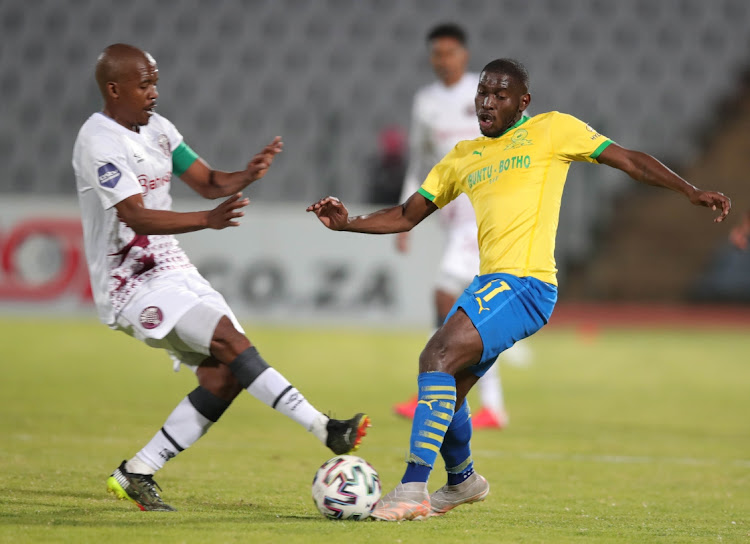 Aubrey Modiba of Mamelodi Sundowns challenged by Lebohang Mokoena of Swallows during the DStv Premiership match between Swallows FC and Mamelodi Sundowns at Dobsonville Stadium on May 29, 2021 in Johannesburg, South Africa.
Image: Samuel Shivambu

Mamelodi Sundowns coach Manqoba Mngqithi hardly complains about the referee, but he could not restrain himself as he let his feelings be known about whistle man Thando Ndzandzeka after his team were held to a goalless draw by Swallows in Dobsonville at the weekend.

Mngqithi felt that the Birds got away with career-threatening tackles and that the officials did not do enough to protect the players on the field.

“It was a good game and we came back stronger in the second half. This is one match that I feel that the match officials did not do their part. They were many leg-breaking injuries that I saw. The tackles were flying all over. The first one that I saw was Lebogang Mokoena on Aubrey Modiba, and another one was Thabo Matlaba on Sibusiso Vilakazi. I also saw Mothobi Mvala and Mokoena, and those are leg-breaking situations,” said Mngqithi.

The coach also vented his frustrations at not being awarded two possible penalties.

“We should have got two penalties where Peter Shalulile and Vilakazi were fouled inside the box. Even Swallows should have been awarded a penalty.”

Mngqithi was full of praise for keeper Reyaad Pieterse, who played his first game this season.

Swallows drew their 19th league game of the season and coach Brandon Truter was happy to take a point against the newly crowned champions.

“I am proud of the boys as we showed that we can compete against the champions. We are on the right track, as we want to build for next season. Pieterse made a couple of good saves. It's another draw but we are the only team unbeaten at home this season with two games to go,” said Truter.

Swallows visit AmaZulu at the Kings Park Stadium in Durban on Wednesday while Sundowns will travel to the Free State for a date with Bloemfontein Celtic.

Wednesday's fixtures (all at 5pm)