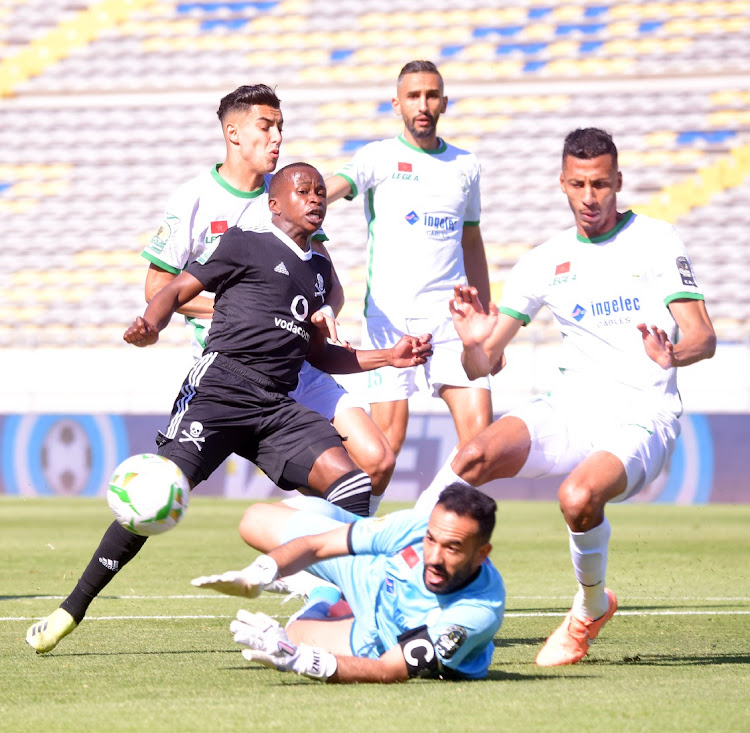 The first leg finished 1-all in Soweto the previous Sunday, meaning Raja prevailed to the semifinals via a 5-1 aggregate victory. The defeat could further jeopardise Pirates coach Josef Zinnbauer's future.

Despite the fact that they were desperate for goals, Zinnbauer stuck to his unpopular approach of starting the game without a recognised striker, leaving Gabadinho Mhango, his only fit natural striker, on the bench.

Thembinkosi Lorch and Deon Hotto shared the responsibility of operating as false strikers. The duo hardly threatened the  Raja rearguard. Mhango was only introduced early in the second stanza, replacing Siphesihle Ndlovu.

The hosts got down to business very early, netting the first goal, courtesy of Ben Malango, in the sixth minute. Raja's first goal put the Buccaneers on panic mood. Central defenders Thulani Hlatshwayo and Innocent Maela played too far  apart from each other, giving Raja forwards an edge to penetrate in between them.

The Moroccans' supremacy was also enhanced by winning the midfield battle, with Fabrice Ngoma and Omar Arjoune getting the better of their Pirates counterparts in Abel Mabaso and Thabang Monare. Ngoma and Arjoune won most of the second balls and they made sure their defense was never troubled. Mabaso, who wasn't in his element, was replaced by Nkanyiso Zungu at halftime

Zakaria El Wardi netted the hosts' second goal just eight minutes before the half-hour mark. The second goal caused the South Africans to panic even more, adding more numbers upfront while leaving gaping holes at the back. Even the likes of Hlatshwayo and Maela pushed forward.

A minute post the hour mark, Raja were 3-0 up thanks to Soufiane Rahimi's brilliant chip. Things went from bad to worse for the Sea Robbers when Malango, the man who also scored the important away goal at Orlando Stadium,  completed his brace to make it 4-0  in the 36th minute.

Raja didn't have the same intensity in the second half but their brilliant game management enabled them to prevent a somewhat lukewarm  Pirates from scoring what would have been a mere consolation.

Motale tells JZ to be more bold
Sport
11 months ago