Bucs must score in second leg to progress 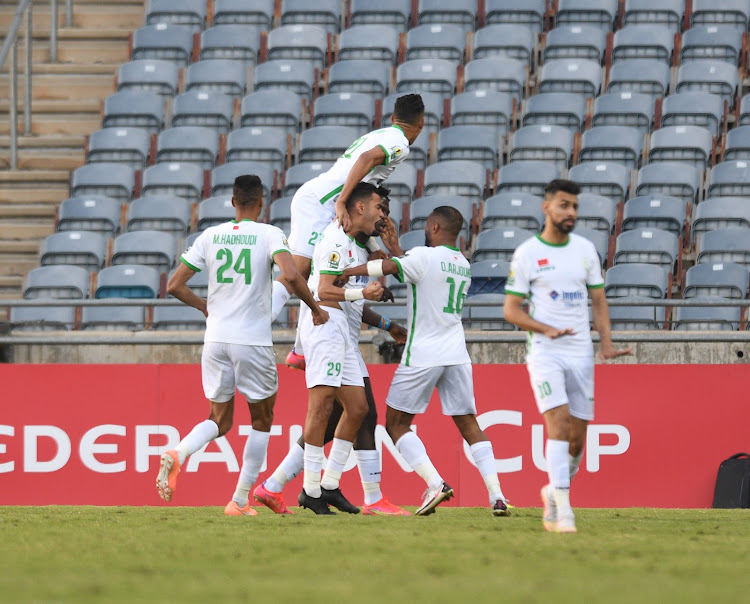 Ben Malango celebrates with his Raja Casablanca teammates after scoring the all important away goal at Orlando Stadium.
Image: Sydney Mahlangu/BackpagePix

Orlando Pirates’ chances of advancing to the CAF Confederation Cup semifinals hang by a thread after allowing Raja Casablanca to score an away goal.

The quarterfinals first leg at Orlando Stadium ended in a 1-all draw yesterday. The away goal puts the Moroccans in a favourable position heading into the second leg at home on Sunday.

Coming into this game, Raja had never conceded a goal in their last six Confed Cup matches. It was Vincent Pule, via a neat looped effort, who put the Buccaneers ahead just six minutes before the halftime break.

The Buccaneers regressed in the second-half and became more defensive while Raja pushed more numbers forward in quest of an equaliser that came in the 72nd minute courtesy of Ben Malango, who bullied Ntsikelelo Nyauza to win an aerial duel before beating Wayne Sandilands.

Pirates created more chances and were dominant in the first half. Pule and Hotto were Bucs’ livewires, initiating attacks with quick one-twos in pockets of space. Full-backs Bongani Sam and Wayde Jooste on the left and right flank were effective in transition.

The pair also whipped in a number of enterprising crosses to locate Hotto. However Casablanca defenders, especially centre-backs Ilias Haddad and Marouane Hadhoudi, used their height to deal with those long balls.

At times, the Pirates defence couldn’t contain skilful Soufiane Rahimi, resorting to fouling him. The 24-year-old ace, who’s linked to Egyptian giants Al Ahly, constantly used his agility and skill to get the better of  Nyauza and Thulani Hlatshwayo.

In the opening stages of the first half, Pirates were fortunate not to concede a penalty when Nyauza handled the ball inside the box. Kenyan referee Peter Kumaku waved play on, causing tempers to flare on the visitors’ bench and on the field.

Pirates coach Josef Zinnbauer again stuck to his unpopular system of starting the game without a recognised striker, preferring to deploy Deon Hotto upfront while his natural strikers, Tshegofatso Mabasa and Gabadinho Mhango, settled for spots on the bench.

Replacing Fortune Makaringe to play the last 15 minutes of the game, Thembinkosi Lorch featured for the first time since tearing his abductor muscle on February.

The race for automatic promotion was narrowed down to between leading Royal AM and second placed Sekhukhune United after long-time leaders Richards ...
Sport
5 months ago

There is all to play for in the final round-robin mini-league of the DStv Diski Challenge Rewired this weekend. A place in the semifinals is up for ...
Sport
5 months ago