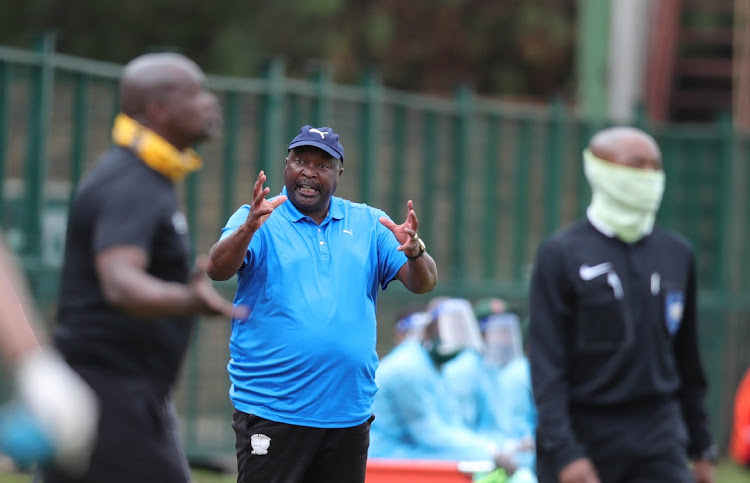 Jomo Cosmos owner-coach Jomo Sono has explained why they have decided to play all their remaining home games at Tsakane Stadium rather than Potchefstroom’s Olen Park.

Ezenkosi had to make a financial decision as they were made to fork out around R25,000 in expenses per game at the North West venue.

Speaking to Sowetan yesterday, Sono explained that their decision to abandon Olen Park for the East Rand’s Tsakane Stadium was influenced by financial considerations. Ezenkosi had played all their seven home games thus far at Olen Park.

“Playing in Potch [at Olen Park] is costing us a lot of money. We pay R10,000 to use the venue and we also have to pay for things like ambulances. We end up paying almost R25,000 for every game there… it’s a lot of money,’’ said Sono.

The Ezenkosi supremo also explained why they had to leave Tsakane in the first place. Sono hinted that since games are played without spectators due to Covid-19, the league isn’t as strict when it comes to the stadiums meeting some of their requirements.

“We left Tsakane because professor [Ronnie] Schloss [the Premier Soccer League’s COO] told us that the ground wasn’t suitable for games… they wanted a certain grading certificate but now because the fans are not allowed that certificate isn’t wanted,’’ Sono said.

“We discovered later that we should have played there in the first place, since the games are played behind closed doors. We would have saved a lot of money there at Tsakane.’’

While their base is in Johannesburg, Cosmos have been wanderers over the years, playing their home games all over the country. At some point they used Giyani Stadium.

However, East Rand stadiums such as Tsakane, Makhulong, Vosloorus, Huntersfield and Thokoza have always been Ezenkosi's most preferred venues. Cosmos’ first game at Tsakane Stadium is tomorrow against JDR Stars at 3.30pm.

Black Leopards interim coach Lehlohonolo Seema hopes their Nedbank Cup 2-1 victory over Jomo Cosmos at the weekend can prove to be a turning point ...
Sport
1 year ago

Bafana Bafana abandoning their bus due to traffic‚ Thabo Mbeki’s visit to the change room and Sizwe Motaung’s nerves so overwhelming him he had to ...
Sport
1 year ago
Next Article