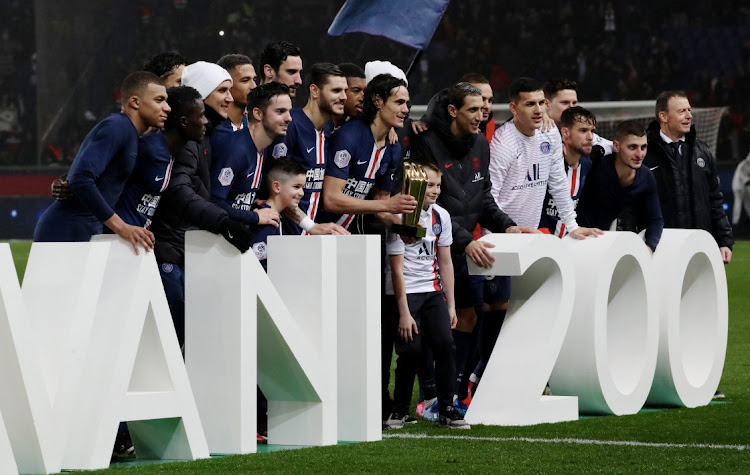 Edinson Cavani of Paris Saint-Germain (PSG) celebrates his trophy for the 200 goals scored for the club with teammattes.
Image: Xavier Laine/Getty Images

London – The English Football Association (FA) panel handed Edinson Cavani a three-match suspension despite acknowledging the Manchester United striker was not deliberately racist and had not known his language on social media was offensive.

Uruguay striker Cavani was last week banned for three games and fined £100,000 (about R2.04m) for posting an Instagram message to a friend with what the FA decided to be a racist term after his Manchester United side's 3-2 win over Southampton on November 29.

The full findings of the FA regulatory commission were published yesterday, explaining why Cavani was handed a minimum suspension under FA Rule E3.1.

“The commission were satisfied that the player wrote his reply in affectionate appreciation of a message from his Uruguayan friend and that it was not designed or intended to be racist or offensive either to his friend or others reading the content of the Instagram post,” the FA commission said. “Such a conclusion was supported by all the available evidence relevant to the circumstances in which the post was made and having regard to the character and response of the player ... However, it is not sufficient that the player simply had no such intent.”

The FA argued that “a follower of English Premier League football” would have deemed the word “negrito” as racially offensive. The South American Football Confederation (CONMEBOL) and Uruguay Football Association have criticised England's FA for banning Cavani, who joined United in October. The FA commission expressed surprise about lack of media training offered by United on Cavani's arrival so that he be “better placed to understand the cultural differences that might give rise to issues with a foreign player posting information on a social media platform”.

We had no business dropping points, Tembo fumes

SuperSport United coach Kaitano Tembo demands an improvement when his team visit newcomers TS Galaxy in their DStv Premiership encounter at the ...
Sport
1 year ago

Despite topping the GladAfrica Championship standings, charismatic Jomo Cosmos owner-coach Jomo Sono is of the view that it’s too soon to talk of ...
Sport
1 year ago
Next Article