Kaizer Chiefs great Doctor Khumalo remembers playing in front of Maradona: 'he just walked in with his family' 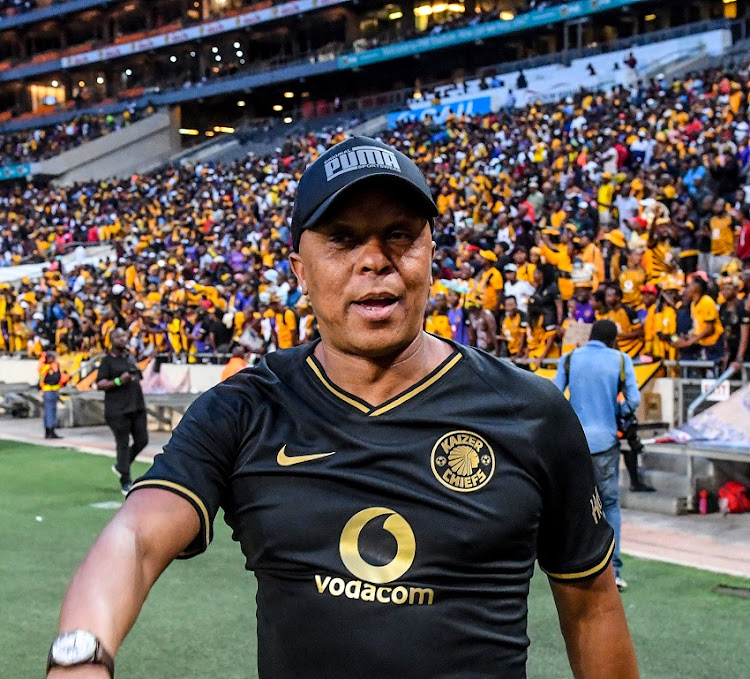 For former Kaizer Chiefs darling and Bafana Bafana star Doctor Khumalo‚ playing against Boca Juniors in front of Diego Maradona is a career highlight etched into his memory.

Khumalo said on Thursday Argentina’s 1986 World Cup-winner Maradona‚ who died aged 60 on Wednesday‚ was‚ like most footballers who grew up in the 1980s‚ a childhood hero.

Bafana’s 1996 Africa Cup of Nations-winner played a stint at Ferro Carril Oeste in Argentina in 1995‚ before the deal was cut short by issues regarding the agent’s handling of the affair. He recalls playing at Estadio Alberto J Armando‚ Boca’s home ground more popularly known as La Bombonera‚ one of the most intimidating club venues in world football.

Maradona played for Boca before signing for Barcelona in 1982‚ and again in the 1990s‚ and post his playing career remained one of the great club’s most fanatical supporters.

“I remember the game we played against Boca Juniors on a Sunday‚ and we were warming up and I was wondering what all the hullaballoo was about‚” Khumalo recalled.

“Because the stadium gets full at about 11am. And‚ you must understand‚ that man is seen as a godfather of football‚ because football in Argentina is a sort of religion.

“In Argentina even the smaller teams get crowds. But when we played Boca‚ that was when I felt‚ ‘I am in Argentina’.

“I think there was five‚ 10 minutes left of the warm-up and I heard the crowd chanting‚ ‘Ma-ra-donna’. And I thought‚ ‘But this guy’s not playing’.

“Only to find that at the Boca Juniors' stadium he’s got his own private suite. So he just walked in with his family.

“And when I looked up I saw [Claudio] Caniggia‚ Maradona‚ the likes of [Gabriel] Batistuta‚ and I was like‚ ‘Wow’.

“And then what he does is he walks up to the front of his private suite‚ where there’s like a glass‚ and he’ll bow east‚ bow south‚ and bow west. And when he bows the crowd [in that stand] acknowledge him by raising their hands and say something in Spanish – and the stand at the other side does the same. So it’s sort of a synchronised way of greeting.

“Those guys – not only Maradona‚ though‚ yes‚ of course he might be the cherry on top – but when it comes to celebrating ex-players it’s amazing. Because Diego Simeone‚ when he walked in‚ you should have seen the crowd.

“So I was trying to figure out if Maradona is the one who invites those guys to his private suite. But I must say that guy is something else‚ not just in Argentina but the whole of South America.”

Khumalo came through the game well.

“Look‚ we lost 2-1 to Boca. I played the whole 90 minutes. It was a tough team to play against‚ obviously‚ with the 12th player.

“But fortunately enough I earned my stripes because the entire Argentina knew me from when I scored against them in the [1995] Mandela Challenge at Ellis Park‚ in the 1-1 draw.

Khumalo returned to La Bombonera in May 1998‚ but did not play‚ when Philippe Troussier’s Bafana lost 2-0 to Argentina there in a France ’98 World Cup preparation friendly.

“Supporters of Oeste came to the hotel. They still remembered who I was‚ a few years later‚ and took me and a few teammates – Benni McCarthy‚ David Nyathi‚ Shoes Moshoeu – to lunch.

“I scored a goal on debut for Oeste [against Independiente] – the video that’s making the rounds on YouTube – from a very awkward angle.”

Khumalo said he never had any personal interactions with Maradona when he came to South Africa as Argentina coach for the 2010 Fifa World Cup.

“I didn’t because I was deployed as an ambassador then. Remember‚ we had a lot of problems in terms of securing the fans to come to SA. So I also went back to Argentina‚ and was deployed in South America to sell the World Cup.

“And with our ambassador‚ Tony Leon‚ and Standard Bank‚ we had a press conference. Argentina were threatening to qualify‚ and had a game away against Uruguay to get through.

“And I did say that without Maradona the World Cup in SA would never be the same. They went on to win the game‚ and the following day they said‚ ‘The Doc medicine worked for Argentina’‚ in their papers.

“And Maradona‚ even as a coach‚ was one of the stars of the World Cup.”