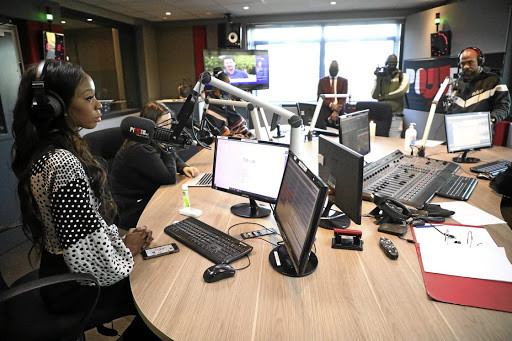 "A very good morning for the last time." This is how Faith Mangope opened Power FM Breakfast show on a sombre tone yesterday, just under 24 hours after co-host Bob Mabena's untimely death.

It was visibly not easy words for the pint-sized radio broadcaster to utter, and she emphasised every word with every beat of her heart.

Directly opposite her was an empty chair and microphone where Mabena used to sit as the flame of a candle in the centre on the station symbolised remembrance.

Mabena died on Monday from cardiac arrest. He was 51.

There was no dry eye in the studio from the young team that worked with Mabena and often teased him for being the oldest in the room.

The first 20 minutes of the show that airs between 6am and 9am was understandably chaotic.

At one stage, a wrong song was played instead of Mabena's hit Get Funky.

But as soon as they managed to play the right song at the second attempt, the mood in the studio lifted and they started jamming to the '90s smash hit.

The last show Mabena did with his team that includes on-air personalities Mangope, Mmasekepe Matsebane and Refiloe Matsela, was on Friday.

"I'm in complete shock and disbelief because I was with this person on Friday. He came in and we had our usual banters," Mangope said.

"That was a habit we developed with one another and to say that it's 'no more' ... it's a feeling I can't describe.

"I'm trying to comprehend that my radio partner is no more and that for me will take some time. But I'm grateful for the time we had. That must never be taken away. He took me back to the beginning of radio in our last conversation and he was taking me through how he was during his 10-year at Radio Bop," Mangope said.

"It was an interesting conversation where I said I'm going to take a back seat and hear about how old you really are. That was our life and we used to tease each other a lot."

Mangope fought back tears for the most part of the show, but as they played Tsepo Tshola's Ho Lokile at 8.20am, she was inconsolable as she let the waterworks fall free.

Mangope has known Mabena for 10 years. Their time on the show together was cut short as Mangope only joined the show in March.

Bob Mabena died while working on his album launch

Legendary radio and television broadcaster Bob Mabena was in the middle of organising the launch party for the album he had released two weeks before ...
Entertainment
10 months ago

"We were just finding our groove and just finding ourselves. I'm going through that shock of realising that our time on this show together were his final in radio," Mangope said.

"He has left a legacy of excellence. One thing I know for sure is that he wants every practitioner of radio to know that you have to understand the craft and respect it.

"It's not just a microphone that goes on, but there is a responsibility attached."

Moabelo immediately corrected me when I said he was filling in for Mabena.

"I can't call it filling in because that will be disrespectful. I'm just helping out and supporting the team," he said.

"No one can fill that Bob Mabena gap because Bob's shoes literally and figuratively are size 12.

"For me, it's about having had the opportunity to work with the legend that was relevant with both young and old people," he said.

Before Power FM, Moabelo worked with Mabena at Kaya FM. Mabena first met Moabelo as an aspirant radio broadcaster working at Radio Turf and he offered him the best advice.

Moabelo recalled how Mabena, with a cigarette in hand, cautioned him to never touch alcohol and smoke.

During the tribute show, listeners, legendary soccer star Doctor Khumalo, arts and culture minister Nathi Mthethwa and childhood friend Winston Maimane called in to remember Mabena. Noticeably emotional, Power FM chairperson Given Mkhari made a brief appearance in the studio at the end of the show but opted not to speak.

"In his personal life he was just a big baby," Maimane said.

"He loved his kids and wife. His kids were everything to him, which is going to take those who knew that part of his life time to adjust."