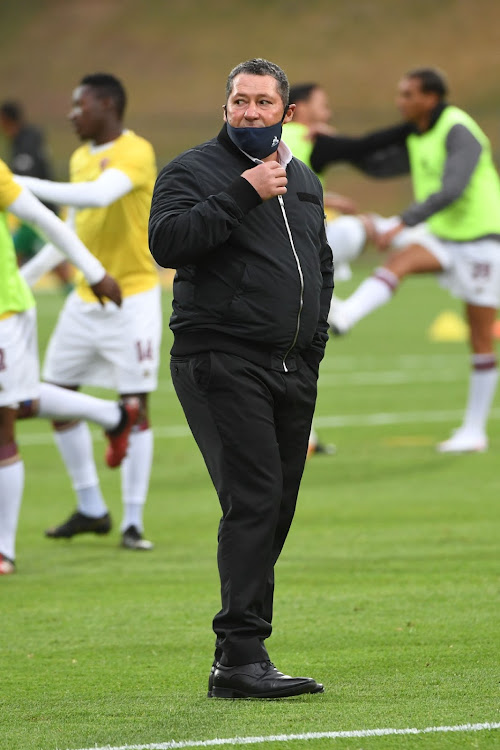 Stellenbosch coach Steve Barker is relishing the prospect of facing Orlando Pirates in the DStv Premiership encounter at the Orlando Stadium tomorrow at 7.30pm. The Buccaneers ended the Western Cape-based outfit’s unbeaten run in the bio-bubble in their last meeting.

But Stellies also collected the three points at the Cape Town Stadium when they defeated the Soweto giants 1-0 in their 2019-20 first-round meeting.

Barker is looking forward to the trip to Soweto and fancies his team’s chances of collecting the three points. Both teams are going into the next game on the back of 1-1 draws against AmaZulu and Swallows.

“I don’t think that it was our best performance against Swallows, to be honest. We gave away possession cheaply and allowed them too much space on the ball. We accept a point from our opening match. We were not at our best in the first match,” explained Barker.

But he expects an improved performance against the Buccaneers. Stellies have a few players on suspension and are still waiting for two international players to arrive in the country. “We are still waiting for one or two players to come back from injury and suspension and two new signings from abroad. But we are looking forward to the match against Pirates, and we are going to Soweto to try and win the game,” he said.

So much is expected from AmaZulu this season and coach Ayanda Dlamini was happy with the point his charges earned from their opening league match ...
Sport
10 months ago

Meanwhile, Swallows also face a tough encounter when they take on Bloemfontein Celtic at Dobsonville. Coach Brendon Truter said his charges gave a good account of themselves against Stellies.

“A draw against Stellies was a fair result. Normally when you play away from home, you are targeting a point. We forced a mistake to win a penalty, but repeated the same mistake in our penalty box to concede a silly penalty. When it comes to the preparations and conditions of the team, we still need more time to get it right. We will get better in time,” said Truter.

But there is barely time to work on a lot of things that Truter intends to work on as Celtic lie in wait for them. “Our next game is a difficult one against a good team.

"They have recently played in the Nedbank Cup final and beaten Mamelodi Sundowns in the MTN8 quarterfinal. They have good structure and good players. It’s going to be a tough game for us, but we want to collect the three points at home.”