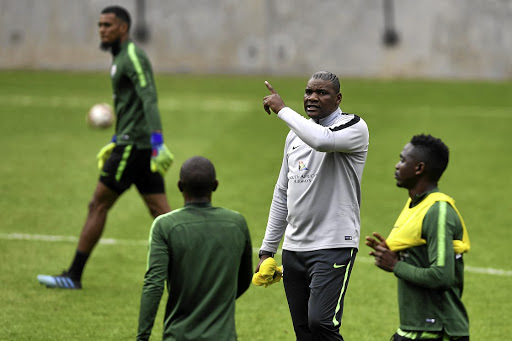 Bafana Bafana coach Molefi Ntseki has kept his word and included as many as three debutants in his starting lineup for the international friendly against neighbours Namibia at the Royal Bafokeng Palace at 6pm on Thursday night.

Central defender Thibang Phete‚ who never played in the domestic topflight and began his career at Belenenses SAD in Portugal‚ AmaZulu's Siyethemba Sithebe and fellow midfielder Thabo Nodada complete the trio of debutants to be handed the Bafana jersey for the time.

SuperSport United skipper and goalkeeper Ronwen Williams will lead the team in the absence of regular Bafana captain Thulani Hlatshwayo‚ who along with Andile Jali‚ Themba Zwane and Darren Keet‚ were not considered for this match.

Ntseki’s defence is completed by Mamelodi Sundowns’ defender Mosa Lebusa who will play at the heart of defence alongside Phete‚ while Innocent Maela and Reeve Frosler start on the right and left wings respectively.

Nodada and Sithebe will man the midfield with Mthobi Mvala and Keegan Dolly‚ with Kermit Erasmus and Luther Singh completing Ntseki’s starting XIs as forwards.

The match will be beamed live on SABC 3 and Bafana will don their new kit sponsored by Le Cog Sportif‚ the French company‚ for the first time on Thursday night.