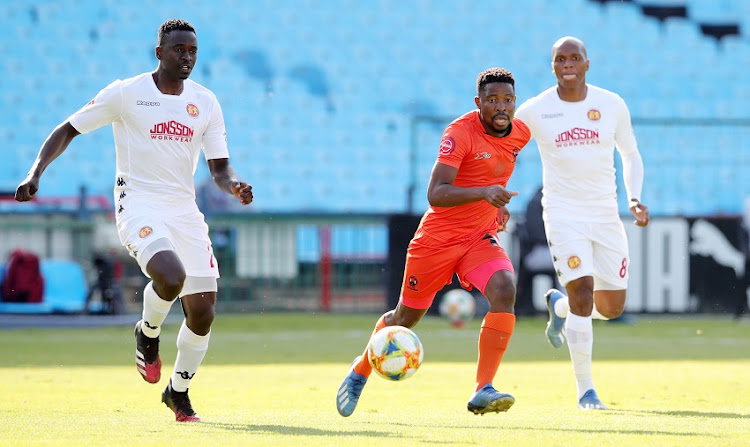 In an illustration of the immense pressure that last place in the Absa Premiership bring to bear on a team‚ Polokwane City had a second-half lead against Highlands Park but had to settle for a 1-1 draw and a point.

Limbikani Mzava's own goal in the 65th minute put Clinton Larsen's Polokwane in a position to earn a crcuial three points and their first win of three game in the bio-bubble.

But‚ for a team who had conceded six goals in their previous three games‚ all off those defeats‚ the lurking menace of the Premiership's most dangerous scorer right now‚ Highlands' hitman Peter Shalulile‚ proved too great a threat. The Zimbabean headed Highlands level in the 74th to join Orlando Pirates' Gabadinho Mhango as PSL joint-top scorer on 14 goals.

For a second time Polokwane spurned a crucial lead‚ as they had two games previously when they had a 2-0 advantage on Kaizer Chgiefs but ended 3-2 losers.

The two teams came into the game with contrasting priorities.

Polokwane‚ having come out empty-handed with defeats in both their bio-bubble games‚ are desperate for points in their relegation battle. City did move off bottom place with the point earned‚ into second-last‚ bumping AmaZulu into last.

Highlands‚ in eighth place‚ have less dire ambitions of pushing for the top eight.

Two sturdy sides battled hard at each other in the opening half. Highlands began the stronger team.

City's goal came from a throw-in as right-back Mpho Mvelase got the cross in towards striker Chartlton Mashumba‚ who got up between the Highlands centrebacks. The Zimbabwean‚ though‚ did not connect ‚ and it was the head of Mzava that steered the ball past Kapini.

But the predatory striking skills of now joint top-scorer Shalulile lurked‚ and Highlands equalised with a textbook strike. Shalulile rose to meet Lindokuhle Mbatha's corner from the right and explertly deflected his header past Chigova just inside the left upright.