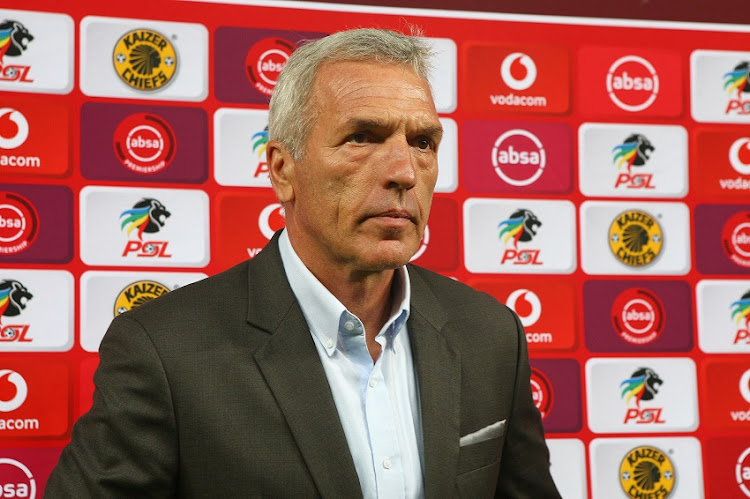 Kaizer Chiefs never got carried away when Mamelodi Sundowns slipped up in the Absa Premiership title race‚ so nor should they overreact to their own inability to open a nine-point lead suffering a 3-1 defeat to Bloemfontein Celtic‚ coach Ernst Middendorp has said.

In another dramatic week in the championship battle‚ Chiefs bounced back from 2-0 down for a 3-2 victory against Polokwane City on Saturday‚ and then Sundowns slipped 3-2 to Cape Town City on Monday.

That presented Chiefs a chance to extend their lead to nine points‚ though Downs have a game in hand‚ if they had won against Celtic at Tuks Stadium on Wednesday night.

Chiefs took a lead through Erick Mathoho’s header in the 35th minute‚ but then succumbed mildly to fired-up Celtic’s comeback onslaught via goals by Sera Motebang (45th and 48th) and Victor Letsoalo 74th.

“With this movement‚ counterattack‚ we had a lot of challenges‚ in particular in the second half‚” Middendorp admitted.

“It’s definitely something that we were thinking would be going differently. But‚ OK‚ the show goes on and in three or four days we have the next game.”

Middendorp said he had not gotten carried away with enthusiasm when Sundowns faltered on Monday‚ so would also not panic because of Amakhosi’s slip-up.

He did say Chiefs need to be aware that in Covid-19 conditions such upset results seem on the cards‚ and try to find solutions to prevent such an occurrence again on Sunday when Amakhosi face Steve Barker’s always tough Stellenbosch FC at Orlando Stadium.

“It’s not a situation for me that just because another team hasn’t made the points that I was carried away and we thought that everything is fantastic‚” the coach said.

“In this campaign starting August 8 and ending on September 5 everybody must know that.

“And OK‚ it’s definitely something that we have to be alert about‚ to prepare ourselves to be in a better shape on Sunday playing in the next game.

“It’s not really about that we got carried away. We were aware about it‚ that it is a difficult game. It will also not be easy on Sunday playing Stellenbosch.

“It is definitely not about getting carried away‚ not about ‘wake-up call’. It’s about moving with a clear direction on what has to be done for the next game.”

Middendorp showed similar unflappability when Chiefs failed to take a six-point advantage last week‚ being held to a 1-1 draw against Bidvest Wits the day after Sundowns drew 0-0 against Orlando Pirates.