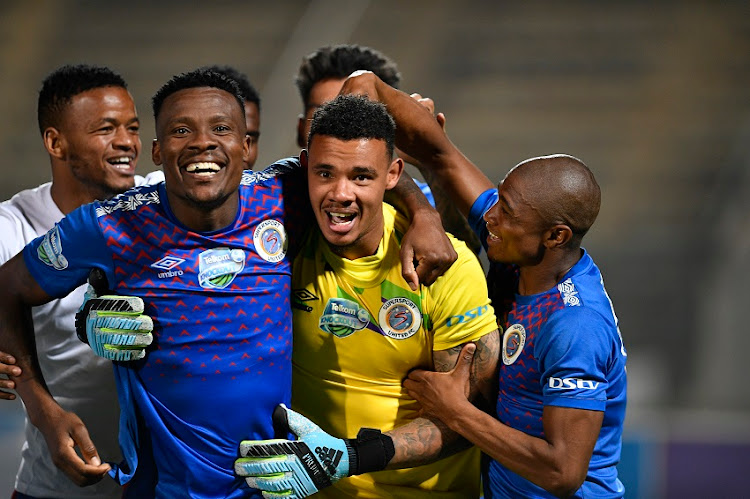 SuperSport United might be keeping up their fitness regime with individual programmes at home but goalkeeper Ronwen Williams admits he is missing the changeroom banter.

“Definitely I miss it‚ I’ve been in there almost every day for years‚ spending time with the boys‚” said the Bafana Bafana goalkeeper.

“It’s been a challenge in these times‚ especially when you are very close to your team-mates.

“So we do call each other from time to time but it is not the same as the time we spend in the change room.

“It’s always nice having the guys around‚ having a laugh and a joke. We’ve always had the funny guys‚ the comics‚ in the team to lift our spirits.

“And when I’ve had personal problems‚ it’s also been nice to have the other guys to speak to.”

But there are now more important factors than just football to consider‚ he adds.

“I think we all miss being around each other‚ but our CEO Stan Matthews has told us that for now‚ at this moment‚ the most important thing is everyone’s health and safety‚ and looking after our families.”

“It’s difficult‚ it’s not something I’ve ever had to do before‚ but it tests your mental strength. That might be a good thing about it all.”

To keep up morale‚ SuperSport’s technical crew set the players daily challenges and the competition to come up on top is just what the top sportsmen need to keep the juices flowing.

The challenges are usually one minute.

“We have to send in the evidence by video clip.

“Jesse Don (the 20-year-old signed from Ubuntu Cape Town last season who has had just one appearance for SuperSport) and (captain) Dean (Furman) are always up there‚” says Williams.

He‚ like everyone else‚ is itching to get back to action.

SuperSport were third in the Premier Soccer league standings when the league was suspended‚ eight points behind leaders Kaizer Chiefs and having played two matches more but still in with a mathematical chance.

“We know we’ve messed up but there is a slight chance you know‚ and that slight chance we have we’ll do our best to use to try to collect maximum points.

“That’s all we can do really‚ because our fate is in someone else’s hands now.

“That’s not how we would want it.

“We know we let ourselves down in February when we lost two games to (Lamontville Golden) Arrows and Stellenbosch.

“But there is no need to cry over that now‚” he added.

Williams says the club can still look back with pride on the season after winning the MTN8‚ “but we’ve had cup success before and it’s the big one‚ the league title‚ that we want”.