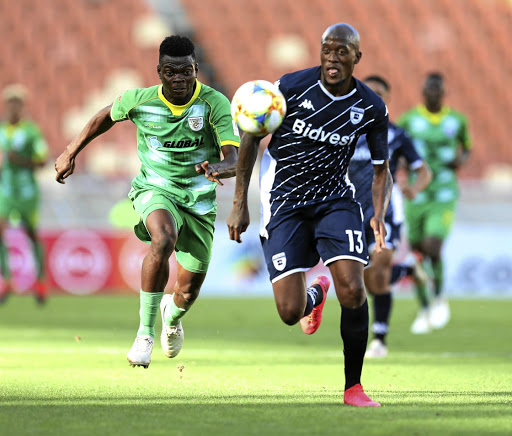 S'fiso Hlanti of Wits, right, is challenged by Richard Mbulu of Baroka in a previous PSL match. / Kabelo Leputu/BackpagePix

S'fiso Hlanti faces a grim future at Bidvest Wits after his mistake in their 0-2 defeat at SuperSport United last weekend.

A source close to Wits informed Sowetan that Hlanti was summoned to the club's management office yesterday to be interrogated about his recent dip in form, following a public dressing-down by coach Gavin Hunt at the weekend.

Quizzed if Hlanti, 29, would still keep his place in the starting XI going forward, Hunt suggested he had not arrived at that decision yet.

"I don't know [if Hlanti will remain part of the team], we will see. For now all is fine. I don't know how he took the blame but it's okay," Hunt told Sowetan yesterday.

"Is he the one who told you that [that he was called to the office]? What I know is that he was at training. you know more than me my friend."

Hlanti gave away a penalty that resulted in SuperSport's second goal in Wits' 0-2 defeat to Matsatsantsa.

Wits out of the title race after draw

Unfit stars to carry SA against Libya
Sport
2 years ago

The Bafana Bafana defender tried to dribble in his own box, before he was dispossessed by Guily Manziba but the shocked Wits man fouled him, with Bradley Grobler converting the resultant spot-kick.

Even though he actually never disclosed the name of the player he was referring to, it was clear the visibly incensed Hunt was lambasting Hlanti in his post-match television interview after the SuperSport loss at Mbombela Stadium in Mpumalanga.

"We end up losing the game [because of] the same player and I am gonna say it, he cost us the whole season, he has cost us two goals again tonight [on Saturday]. It's unacceptable," Hunt told SuperSport TV.