Pitso unhappy with draw at Petro 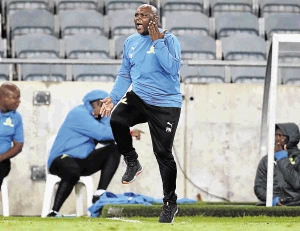 Despite being top of the group and unbeaten in the CAF Champions League, there are some things Mamelodi Sundowns coach Pitso Mosimane is unhappy about.

The Brazilians had to fight back to draw 2-2 with Petro de Luanda in Angola to Saturday to preserve their undefeated run. They now have 11 points from five games in Group C.

Gaston Sirino grabbed the first goal for Downs while Motjeka Madisha scored the late equaliser. Ricardo Estevao and Jacques Tuyisenge were on the score-sheet for the home team.

"I don't know if we tried to win this game to be honest. Sometimes it's a mentality, the players know we have already qualified and they don't give the match enough intensity," Mosimane said.

"I think the obstacle was ourselves. Maybe the heat was a factor. It was hot for both teams but maybe Petro understand the conditions better. Normally, we play at night in SA ... maybe that affected the intensity of the game."

Downs have been dominant in the competition where they have already qualified for the knockout stages.

Statistically, this is their best record in the group stages where they are unbeaten with three wins and two draws.

Pitso Mosimane will be hoping that his good friend Steve Komphela can do him a favour this weekend while Mamelodi Sundowns take care of business in ...
Sport
1 year ago

"It's the best record we have ever had in the Champions League. We haven't lost a game in the group and we haven't achieved so many points away. We have five points out of possible nine away and at home we have six."

Having been eliminated in the semis last year, the team wants to go a step further this time around.

"Every coach wants to win the tournament and they can win every match.

"It's not easy because we have other strong teams in the competition. It's very difficult but you need to go as far as you can. Last year we went to the semifinals."