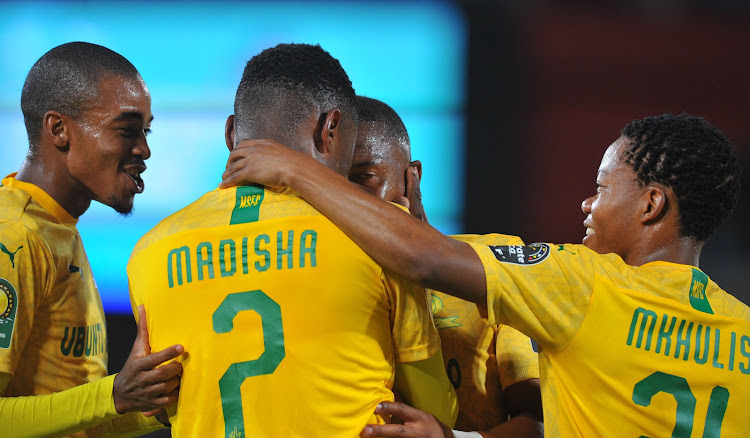 Gaston Sirino put the visitors ahead with a penalty early in the first half‚ but the hosts equalised after being gifted a spot-kick of their own via an atrocious piece of refereeing shortly before the break.

The hosts grabbed another goal with 20 minutes remaining from Jacques Tuyisenge but Sundowns had the last laugh as Madisha powering home a header in injury-time to keep their unbeaten record in the pool.

Sundowns‚ who have already qualified for the quarter-finals‚ will finish in first place if they avoid defeat to their nemesis and Moroccan side Wydad Casablanca at the Lucas Moripe Stadium next Saturday.

The home side should have been ahead inside six minutes when Sundowns keeper Dennis Onyango fumbled a routine catch from a header by Danilson‚ the ball slipping up onto the crossbar and the Petro player unable to turn in the rebound.

Petro threatened again as Onyango pushed a low cross into the path of Jacques Tuyisenge‚ but the Rwandan forward missed his shot with the goal gaping.

Sundowns then won a penalty midway through the first half as Danilson handled the ball in the box and Sirino calmly slotted into the top corner.

But referee Mahamadou Kéïta from Mali evened the score when he awarded a highly dubious penalty to the home side two minutes before the break alleging that Anele Ngcongca handled inside the box when the ball quite clearly hit him in the stomach.

Job equalised for the hosts and it was another example of the difficulties of playing away on the continent.

Onyango had to make a smart save to deny Job when the space suddenly opened up for the Angolan forward early in the second period‚ before the Ugandan gloveman left the field to be replaced by Kennedy Mweene.

But the home side did grab the lead on 72 minutes as Nascimento failed to cut out Picas’ cross and Tuyisenge turned the ball into the net‚ before Madisha denied them victory with a fine finish at the death.