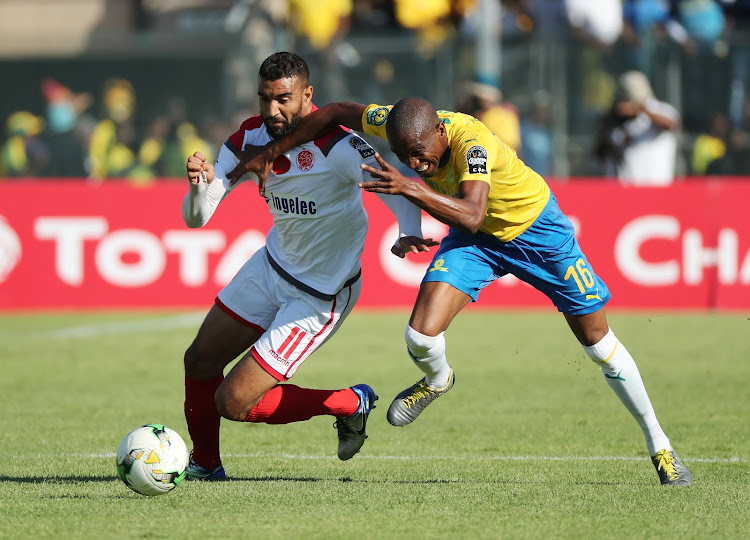 Ismail El Haddad of Wydad challenged by Anele Ngcongca of Sundowns during the 2018/19 CAF Champions League football match between Sundowns and Wydad Casablanca at Lucas Moripe Stadium, Pretoria on 04 May 2019.
Image: ©Gavin Barker/BackpagePix

Mamelodi Sundowns had an early goal controversially ruled out but held their nerve to come away with a credible 0-0 draw against their new nemesis Wydad Casablanca in their CAF Champions League Group C clash at the Stade Mohammed V on Saturday night.

It will be a viewed as a good point on the road against a top opponent, but coach Pitso Mosimane may be left wondering what might have been had his side been a little more clinical in the final third.

Sundowns now head their pool with four points after two rounds, two ahead of Wydad and their next opponents on December 28, USM Alger.

The Tshwane side must now make the mad dash home to face Stellenbosch FC in the Absa Premiership on Wednesday, and then prepare for the Telkom Knockout final against Maritzburg United in Durban next Saturday.

Sundowns had lost their four previous visits to Wydad, all by single-goal margins, since their first meeting in September 2017, and their nine clashes in the subsequent two years means the Moroccans are The Brazilians’ most frequent opponents of any side since in that time.

It also means there was no mystery between the two sets of coaches, each had a strong idea of how the other side would set up and play, and they largely cancelled each other out. In the end it came down to execution on the night and perhaps both coaches will be disappointed in that regard.

Mosimane welcomed Hlompho Kekana back from a four-game CAF suspension picked up in August, Themba Zwane returned from six weeks on the sidelines with injury, while Denis Onyango was also back between the posts after he missed the last two games.

Sundowns had the ball in the back of the net after just 44 seconds, but the goal was inexplicably ruled out for offside, one of a number of highly questionable decisions that, to be fair, went against both teams.

It would have been the perfect start for The Brazilians, who looked lively and certainly fired-up for the clash.

Gaston Sirino shot just wide on the angle, and Motjeka Madisha had an excellent chance to open the scoring a minute before the break when he profited from a defensive error, but with just Ahmed Reda Tagnaouti to beat in the Wydad goal, he blasted straight at the keeper.

Wydad also had their chances in the opening period, a header from Ayoub El Kaabi flashed just wide with Onyango beaten, and Walid El Karti also put a shot from the edge of the box just the wrong side of the post.

Mosimane made a double change 15 minutes into the second half, Lebohang Maboe replacing Jose Ali Meza and Sphelele Mkhulise on for Zwane.

Sirino’s perfectly-weighted pass set Mkhulise away on goal, but as the angle narrowed, his shot was blocked by a combination if a defender and Tagnaouti.

Uruguayan Sirino narrowly shot wide from 35-yards and then volleyed over the top as he continued to be the central figure for the visitors and the man through which much of their good play came.

But he could not force the win their play just about deserved.