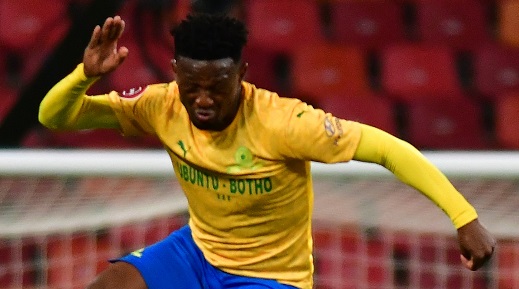 After successfully reclaiming his spot in the Mamelodi Sundowns XI, defender Motjeka Madisha has now set his sights on returning to Bafana Bafana.

From playing only 10 league games last term, Madisha has taken the new season by storm as he has already started 13 of the 14 games he's featured in, across all competitions.

One can argue that Madisha's redemption was also boosted by the absence of Ricardo Nascimento, the reigning defender of the season, who's never featured this season, recovering from a severe groin injury.

"It would be a great reward to get a national team call-up. Each and every player wants to play for the national team and I am aiming for that as well," Madisha told Sowetan.

"The coach [Mosimane] sees the good work that I'm doing, so it was humbling to hear him saying that I deserve to play for Bafana," noted the Brazilians defender, who already boasts two Bafana caps.

Madisha's resurgence has aided Downs to reach the Telkom Knockout final after beating Golden Arrows 2-1 in the semifinal in Durban at the weekend, setting-up a final date with high-flying Maritzburg United.

Madisha, 25, feels reaching the TKO final will go a long way in getting their league campaign back on track, starting by facing AmaZulu at Loftus Versfeld tonight (7.30pm).

Second-placed Downs are winless in their last three league games, with one draw and two defeats against leaders Chiefs and Arrows.

Pitso Mosimane has opened the door to Andile Jali and hinted that the midfielder will be given another opportunity in the starting lineup when ...
Sport
2 years ago
Next Article