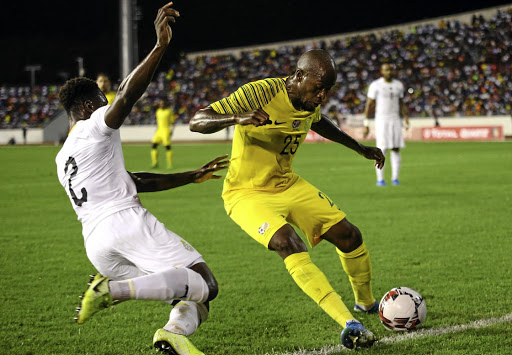 Andy Yiadom of Ghana challenges Sfiso Hlanti of SA in the 2021 Afcon qualifier in Ghana on November 14 last year. The teams are also in the same group in the 2022 World Cup qualifiers.
Image: BackpagePix

Ethiopia could be back to haunt Bafana Bafana after the teams were once again drawn alongside each other in the 2022 Fifa World Cup qualifiers.

Bafana were drawn in Group G alongside Ethiopia, Ghana and Zimbabwe in the draw on Tuesday night.

Although Bafana have some sort of rivalry with each of the teams in the group, Ethiopia stand out as the team that derailed their bid to qualify for the 2014 World Cup in Brazil.

A 1-1 draw with Ethiopia in Rustenburg in 2012 cost Pitso Mosimane his job as Bafana mentor. Mosimane's successor Gordon Igesund also struggled against them as his team lost 2-1 to crash out of the qualifiers. Former Bafana striker Katlego Mashego, who was a member of that Bafana team, says the East Africans are tricky to face.

"At that time they were on the rise and were the underdogs. They had a good team back then and they got the better of us," Mashego said.

Bafana Bafana will face all too familiar foes in their bid to qualify for the 2022 FIFA World Cup after being drawn in a tough Group G at the draw in ...
Sport
2 years ago

"Once bitten, twice shy, as they say, and I think our current team should avoid suffering the same fate."

Meanwhile, Ghana are another familiar foe for SA as the two teams are also in the same group in the 2021 Africa Cup of Nations qualifiers.

"It will be a very interesting encounter against them because we play them three times: twice in the World Cup qualifiers and once in the Afcon qualifiers," he said.

"We know what to expect from Ghana and they know us. They have just appointed a new coach and the players will be looking to impress him."

Ntseki continued: "We are in the top 40 and the expectation is that we qualify for the top 20 and then top 10. After that the last five teams will be going to the World Cup to represent Africa. That is our goal in these qualifiers."

Only 10 group winners progress to the final round of qualifying, with the five winners heading to Qatar 2022.

Bafana Bafana coach Molefi Ntseki says they are fully aware of what to expect from their group rivals after the identity of their opponents in the ...
Sport
2 years ago

Ensuring qualification for the next Africa Cup of Nations has taken on added importance after South Africa were drawn with Ghana again in the ...
Sport
2 years ago

Mamelodi Sundowns are playing their cards close to their chest with regard to the negotiations for a contract extension with coach Pitso Mosimane.
Sport
2 years ago
Next Article