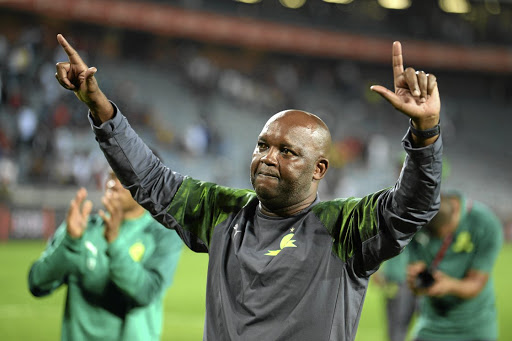 Kaizer Chiefs should perhaps consider getting a psychologist as the mind-games from Mamelodi Sundowns coach Pitso Mosimane heat up.

Sundowns reduced the gap at the summit of the Absa Premiership to just seven points after defeating SuperSport United 2-1 on Sunday.

Should Chiefs experience a slump in form, Downs will be ready to pounce. After losing to Orlando Pirates last week, Mosimane appeared to be giving up on the league race.

But he has done an about-turn and resumed the psychological warfare on Chiefs, declaring the race open still.

"May is too far away. Anything is possible. Imagine if we didn't drop points against Pirates and twice against Wits. It shows that this thing is still alive," he said.

"We are distracted because you looking at Champions League and the domestic league. Other people [Chiefs] are only looking at one thing so they have an advantage."

It is not the first time Mosimane has engaged in this kind of warfare after his team pipped the Buccaneers to the league honours last season.

The former Bafana mentor even downplayed Amakhosi's lead and suggested that he has more respect for Bidvest Wits.

"I would like to talk about Wits because they run the same race as us. They are not a well-rested team.

"So it's very difficult to focus on the league and remain number one in the Champions League. So probably Huntie [Gavin Hunt] will disturb them twice and they still have Pirates and us."

Mosimane has also attributed his team's poor run of form to a difficult string of matches that included facing Wits, Pirates and SuperSport in succession.

As Downs turn their attention to the CAF Champions League, they will face Angolan club Petro de Luanda away on Saturday (2pm SA time).

The Brazilians are top of Group C on 10 points from four games. Wydad Casablanca are second with six points while USM Alger and Petro both have two points each.

Mamelodi Sundowns coach Pitso Mosimane has confirmed that the club tried to sign striker Knowledge Musona but failed to land the Zimbabwean ...
Sport
2 years ago

Mamelodi Sundowns coach Pitso Mosimane intends to push ‘well rested’ Kaizer Chiefs all the way to the finish line in what is expected to be an ...
Sport
2 years ago

'Important to stay where you are loved,' says Pitso Mosimane

Mamelodi Sundowns coach Pitso Mosimane has provided an update on negotiations with the club by declaring that 80 percent of his contract has been ...
Sport
2 years ago
Next Article