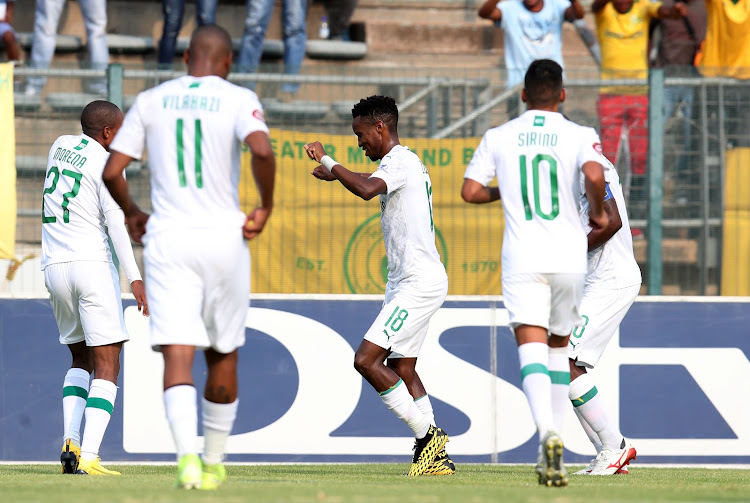 Themba Zwane returned from suspension to inspire Sundowns to a much needed win to keep in touch with leaders Kaizer Chiefs.
Image: Muzi Ntombela/BackpagePix

Mamelodi Sundowns have narrowed the gap on runaway log-leaders Kaizer Chiefs to seven points following their hard fought 2-1 win over SuperSport United during the Tshwane derby at Lucas Moripe Stadium on Sunday.

Sundowns’ goals were scored by attackers Themba Zwane and Thapelo Morena on either half while United’s consolation was put away by their captain Dean Furman from the penalty spot.

Sundowns have now accumulated 35 points from 18 matches, the same as Chiefs, while this defeat leaves United placed third spot with 31 points from 19 matches.

United’s position on the standings is seriously threatened by Bidvest Wits and Orlando Pirates, who are placed fourth and fifth places respectively and they are tied on 30 points.

The Brazilians have also increased their dominance over United as they registered their eleventh win over their neighbours in 13 encounters with the other two matches ending in a draw and a win for Matsatsantsa.

Sundowns now shift their attention to the Caf Champions League this weekend where they travel to Angola for a tricky clash against Petro de Luanda looking to maintain their position at top of Group C.

For United, their next match is against Chippa United at home on Friday where their mission will be to keep a clear distance between themselves and Wits and Pirates who are breathing down their neck.

Both teams did not create enough notable scoring chances with most of the play saturated in the midfield where Andile Jali and Hlompho Kekana battled with Furman and Sipho Mbule.

United coach Kaitano Tembo started the match with an interesting formation of Clayton Daniels, Grant Kekana and Luke Fleurs at the back but they were joined by Onismor Bhasera when they defended.

Tembo must have taken the risk of playing three in his defence because he knew that Sundowns didn’t have an outright striker and they attacked through Sibusiso Vilakazi, Zwane and Gaston Sirino.

On the other hand, Sundowns coach Pitso Mosimane welcomed influential midfielder Zwane back to the starting lineup after he missed midweek’s 1-0 loss to Pirates due to suspension.

Zwane showed why he was missed by Sundowns against the Buccaneers as he opened the scoring just after the half hour mark when he found the back of the net after a mix-up in the United penalty box.

After the opening goal, Sundowns missed a few more good opportunities that could have increased their lead at the half time break with Sirino, Morena and Vilakazi the main culprits.

United leveled matters after 54 minutes through Furman from the penalty spot after Jali was adjudged by referee Eugene Mdluli to have hacked Kudakwashe Mahachi in the box.

Sundowns regained their lead in the 65th minute through Morena who connected with Kekana’s cross from the right flank with precision to give Williams no chance.

Owen da Gama has appealed to the real Highlands Park supporters to stand up and back the struggling side after another disappointing defeat at the ...
Sport
1 year ago

Orlando Pirates completed a week that no one will deny it belonged to them by beating Highlands Park 3-1 through two quick goals by Thembinkosi Lorch ...
Sport
1 year ago
Next Article