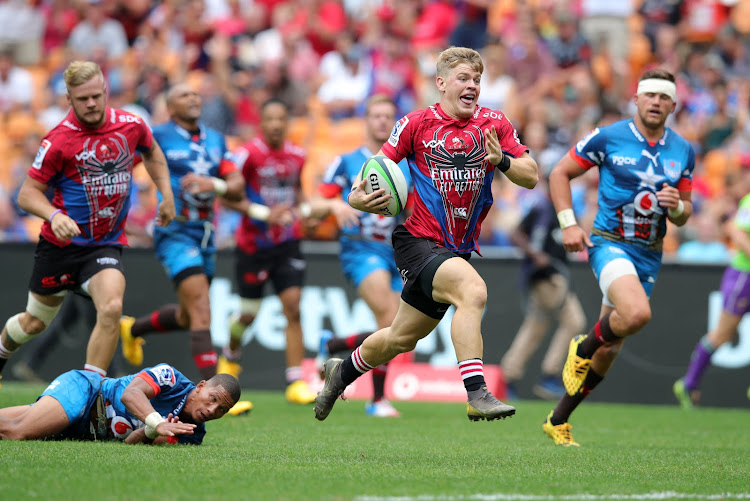 The outskirts of Jozi do not have a towering 1000m mountain but its square dusty mine dumps didn’t deter close on 48,500 people from turning up here on Sunday.

When the dust settled after Super Hero Sunday‚ the Stormers and the Bulls had walked away victorious‚ and with bragging rights until the start of the real deal at the end of the month.

The crowd was a little short of the figure that turned up for the corresponding event at the Cape Town Stadium a year ago and was almost to a man‚ woman and child still basking in the afterglow of the Springboks’ Rugby World Cup victory.

That wasn’t the only thing there was a lot of.

Visible policing was taken to another level around this precinct - there were lots of Marvel characters‚ on the field early season cobwebs‚ especially in the case of the Spiderman Lions‚ but mostly there was trucks loads of commitment.

It was of course also the kind of occasion that lent itself to inanity and frivolity and arming the delirious with microphones can have a jarring affect.

‘Who is your favourite rugby player?’ a bucktoothed child would be asked in the stands‚ while others were confronted with teasers like ‘what advice do you have for the players?’

Thankfully there was rugby too and the collisions were far from child’s play.

South African derbies are played at full throttle and were you to remove the branding‚ the hashtags‚ bluff and the bluster these players would still run into each other with homicidal intent.

The Bulls were forced to stage a comeback and only managed to subdue the Lions in the closing minutes after holding the whip hand for the bulk of the game.

The Lions to be fair‚ did themselves no favours as they found themselves on the wrong side of the law as often as the miscreants who prowl the streets around this stadium.

The Lions’ cause was complicated by a high and penalty rate that culminated in a yellow card for hooker Pieter Jansen in the 28th minute.

Like the Stormers earlier in the day‚ they did show remarkable fortitude as they rode the punches the Bulls threw at them.

Although the Lions made the sprightlier start it was the Bulls forwards who gradually ground their way forward.

By contracting the grizzled Jannie du Plessis the Lions hoped to bring ballast to their scrums but whether they achieved that objective will only be adequately answered later in the season.

The Bulls applied the squeeze but the pressure reliever for the Lions came when Duncan Matthews intercepted before scooting to the tryline with Rosko Specman rapidly closing in.

The Lions however were a little quicker on the draw and they sucker punched the Pretoria side again in the 34th minute from a deft 22m restart adroitly gathered by Jamba Ulengo.

The former Bull offloaded to Matthews‚ another erstwhile Bull‚ who was again forced to pit his sprinting skills against Specman.

It must have been hugely satisfying for Matthews to score twice against his former employers.

It was a little mystifying that the Lions held a 21-7 lead with a man in the bin after 35 minutes but the Bulls kept coming.

Behind their marauding pack Cornal Hendricks ran like a bull in Pamplona but deep in the game he also displayed the deftness of a bovine when he knocked on with the tryline at his mercy.

He atoned a few minutes later when he grabbed the bouncing ball to score the matching try.

Earlier‚ however‚ the Bulls were dealt a blow in the 18th minute when Warrick Gelant sustained an injury that halted play for an extended period before he was transported off the field.

The Lions on Thursday invited the media to a place called the White House and what they said at times sounded like bluster.
Sport
1 year ago

The Lions are still waiting for new recruit Willem Alberts to prove that his body can stand up to the rigours of Super Rugby.
Sport
1 year ago
Next Article