SuperSport say it is not the time to hunt Kaizer Chiefs 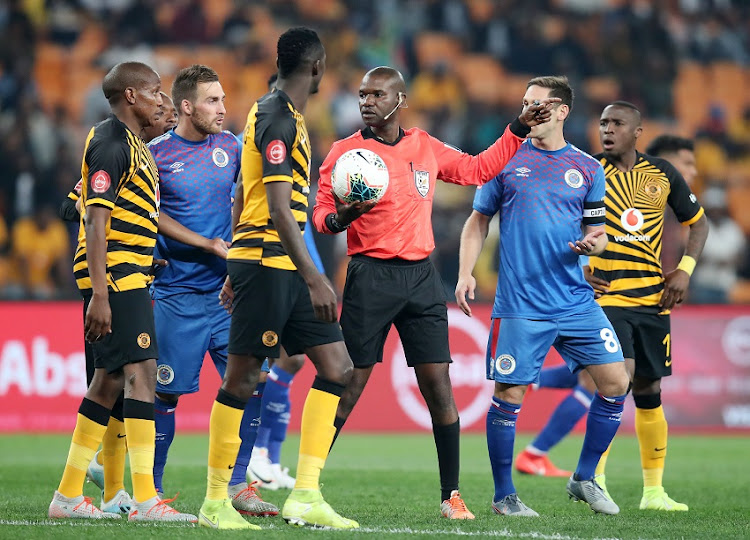 SuperSport United and Kaizer Chiefs players argues with Referee, Olani Kwinda during the Absa Premiership 2019/20 match between Kaizer Chiefs and Supersport United at the FNB Stadium, Johannesburg on the 24 August 2019.
Image: ©Muzi Ntombela/BackpagePix

SuperSport United coach Kaitano Tembo is not thinking about chasing runaway Absa Premiership leaders Kaizer Chiefs at the top of the log at this stage of the season.

United are placed in second spot on the log going into Friday night’s clash against Highlands Park at Lucas Moripe Stadium (kickoff 8pm) but they trail Amakhosi by 10 points.

Chiefs are on a highly impressive run of seven successive league wins and they will be looking to stretch that record further when they host Bloemfontein Celtic in Durban on Saturday night.

“We are still way behind Chiefs. They are ahead of us with 10 points and that is massive‚” said Tembo.

“They still have a game in hand and because of that we can’t really look at them at the moment. They are cruising and they are very consistent‚ we just have to make sure that we take it game by game.

“I think they have had seven wins in a row and that’s championship-winning form in terms of results. We will only start talking about the league if we can at least win three to four games in a row.

“We have drawn too many games so far this season. What we need is to be a little bit consistent.

“They have points in the bag and if they continue at the rate they are going at the moment they will win the league. For us it is to continue working hard but we have them in January [SuperSport meet Chiefs at Mbombela Stadium on January 4] and we have a good record against them.”

On the clash against Highlands‚ Tembo said SuperSport know the kind of team who are travelling to Atteridgeville.

“Going into the Highlands Park game‚ we know what is coming and that it is going to be tough game‚” he said.

“That is not a secret. We know that they are a hard-working team and last season they took four points from us. We know what to expect from them but we will be prepared because in our last game against Stellenbosch FC we dropped two points at home.

“Our previous game was very disappointing – it’s one game that could have been 3-0 or 4-0 but it turned out to be close. We played well and got into good areas but we must put it behind us because we can’t change anything.

“The players are well aware that we dropped two important points there and we need to return to winning ways.”