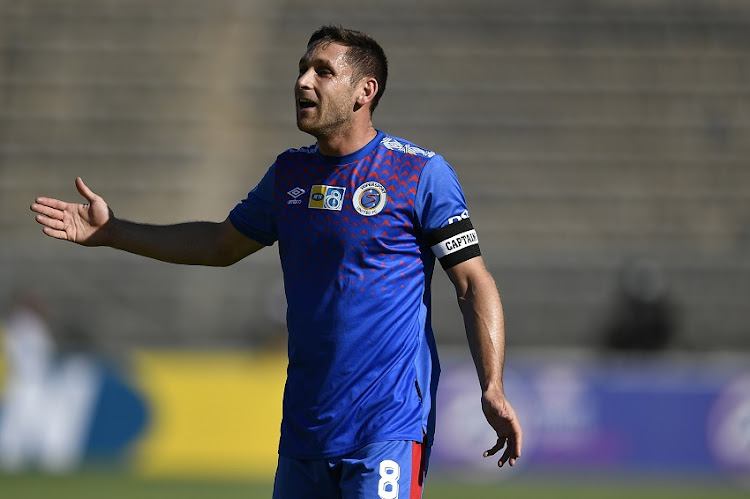 SuperSport United midfield strongman Dean Furman is set to hold crunch talks with the club’s football manager Stan Matthews over his future in the coming days.

The 31-year-old Furman's contract expires at the end of this season in May next year and his future remains uncertain.

Furman‚ who has been with the club since 2015 and has helped them win four trophies‚ confirmed that he would meet Matthews during the Christmas break and then make a decision.

“What is true about my situation at the moment is that my contract is up at the end of the season‚” he said on Wednesday ahead of United's league match against Highlands Park at Lucas Moripe Stadium on Friday.

“What I have said to the club is that after the last two games of the year against Highlands Park and Chippa United‚ I will sit down with the board‚ Stan and the coach to have a good discussion about my future.

"But for now the situation is that we will sit down after the coming two games and have a discussion of where my future lies.

"I originally came here for three years and I was probably looking to leave after those three years‚ but each time I sat down with Stan (Matthews) he has convinced me to stay.”

The Bafana Bafana star said he has not made up his mind yet and is preferring to focus on ending the year with United on a high note.

“There are many different aspects that are going to go with my decision‚ there is a family decision and off course a football decision‚" he said.

"I grew up in the UK playing my football there and I would like to go back and play in one of the leagues there at some stage.

"I am not getting any younger and first and foremost I need to consider my playing career.

"There is a still a lot to play for because I am still involved with Bafana Bafana and SuperSport United are a fantastic club.

“Over the years we have managed to win four trophies and we have been to seven cup finals‚ and that’s what drives you as a footballer.

"Staying here would be great because I know I will be competitive‚ but also there are other considerations that will go into my decision.

"I will sit down with the club soon and iron out my future‚ and hopefully it will be a decision that will suit both parties.”

United coach Kaitano Tembo said they would give Furman time and space to make up his mind.

“I think it is a little bit premature for us to be talking about him leaving the club‚" Tembo said.

"It is important for us to give him a little bit of space and time to make a decision.

"When the time is right‚ we will make the proper announcement.”

Goalkeeper Ronwen Williams called on Matthews to do his best and convince Furnam to stay.

“He is an amazing footballer and an amazing person and hopefully Stan can convince him can to stay. He is a wonderful person‚ very spirited and takes everything he does serious.

"At training he kicks the balls when he loses‚ he is always serious about stuff and those are some of the things that I admire about him.

"That is why he has been so successful‚ his positivity has rubbed on to us and since he has come here we are a different team.”