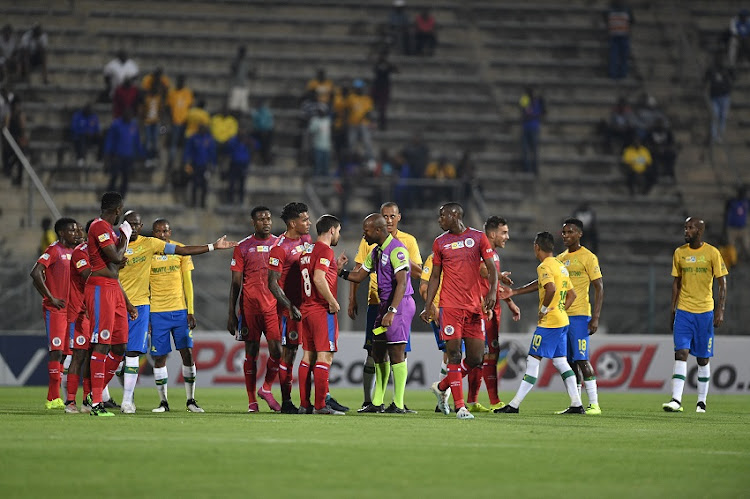 MTN8 cup glory continues to elude Pitso Mosimane after Mamelodi Sundowns were convincingly beaten 2-0 by to SuperSport United in the second leg at Lucas Moripe Stadium on Wednesday.

Thamsanqa Gabuza inspired United progressed to the final 3-1 on aggregate where they will meet Highlands Park.

In the sixth time of asking since he arrived at the club in 2012, this season opening tournament has ended in despair for Mosimane and he will have to wait for next season to give it another crack.

On the other hand, his United counterpart Kaitano Tembo has successfully guided his team to the final for the second season in succession and he will be hoping to be second time lucky.

In his first campaign as head coach last season, Tembo lost to Cape Town in the final but he will fancy his chances with the likes of Gabuza, Bradley Grobler, Sipho Mbule, Aubrey Modiba and Dean Furman in red hot form.

The opener came from a good attacking United move which saw Furman deliver a pass from the left side that rebounded off a Sundowns defender on the path of Gabuza who laid it on the path of Mokoena to do the rest.

Sundonwns tried to recover with a number of attacks, notably from Thapelo Morena, Gaston Sirino, Themba Zwane, Hlompho Kekana and Ali Meza but they could not find the opening.

In the 52nd minute, United missed a glorious opportunity to take the game away from Sundowns when Mbule ballooned the ball over the crossbar after he was set up by Modiba.

Sundowns reacted with their own attack through Tebogo Langerman but his goal bound shot from close range shot deflected from a sliding tackle by Bongani Khumalo for safety.

After the hour mark, Onyango was forced to stretch at full strength to parry away a close range shot by Grobler as United launched another quick attack as the Sundowns defence was caught with their backs against the wall.

Minutes later, Sundowns were again under siege from Gabuza but defender Mosa Lebusa timed his tackle to perfection to thwart the danger and unmarked Kudakwashe Mahashi could not kill the game off from a good position.

With five minutes remaining on the clock, substitute Jamie Webber put matters beyond doubt a shot from the edge of the box to give Onyango no chance.