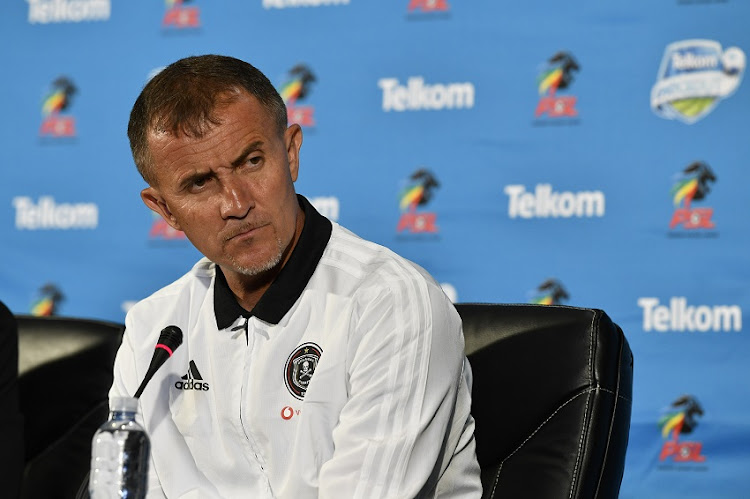 Whether by intention or circumstance‚ former Orlando Pirates coach Milutin Sredojevic has become embroiled in a web of denials before a ball has been kicked under him at new club Zamalek.

The manner of Sredojevic’s hasty departure from Pirates‚ and the country‚ ostensibly taking the first flight out after his resignation on Friday on the eve of an important MTN8 quarterfinal against Highlands Park the next day‚ raises question marks.

But there is more. Here is a timeline of events‚ as I have been able to piece them together‚ since the coach’s departure on Friday night.

As a football journalist who was always friendly with Sredojevic as coach of Pirates‚ who has respected the 49-year-old’s growing reputation and track record in Africa‚ I make no judgments. I just try to present the facts as I can make them out.

Zamalek have officially confirmed the appointment of former Orlando Pirates coach Micho Sredojevic‚ who says his appointment is a “dream come true”.
Sport
1 year ago

A lot of it is confusing. It involves allegations and counter-allegations and denials and media reports of denials that twist into a mangled web‚ much of it lost from Arabic to English on the often enigmatic working procedures of Google Translate.

On Saturday morning Sredojevic was contacted by this reporter in a phone interview where the coach said he was in Istanbul‚ in transit to Belgrade in home Serbia to visit his seriously ill mother.

He vehemently denied what had been stated in a Saturday morning report on the reputed football website Kingfut.com – quoting Zamalek’s eccentric president Mortada Mansour saying the coach had agreed to join his club – that any agreement had been made for him to join Egyptian giants Zamalek.

Sredojevic called the report “total nonsense”‚ and said he had been “travelling to see my mother who is sick [with breast cancer] in Serbia”.

He added: “But if he [Mansour] really wants me he needs to fork out millions.”

And: “That is total nonsense about the other guy [Mansour]. How is it mathematically possible to do the things [travel logistics] in that way?

“He has been begging me to come to his team and whatever. Maybe I will even go. But the point is I have not signed anything‚ I have not agreed anything.”

And yet there‚ just over 24 hours later‚ the first pictures started being posted on Twitter of Sredojevic arriving in Cairo. That seemed a quick change of mind. Zamalek soon posted their video clip on YouTube of Sredojevic next to his new chairman‚ Mansour.

It was the previous night‚ trying to cover Mamelodi Sundowns’ 3-1 MTN8 win against Bloem Celtic in Atteridgeville‚ that I was distracted my three Egyptian football writers reaching me on Facebook Messenger and WhatsApp.

‘Micho’‚ they said‚ had denied speaking to me in a report in the Egyptian media – as far as I have been able to establish‚ on the website Filgoal.com – and making the statements he had made about Mansour‚ and his denial of joining Zamalek.

I was badgered throughout Sunday‚ asked if I wanted to “clear my name”‚ as people‚ and the media‚ in Egypt were saying I was a liar who fabricates reports.

Eventually‚ having earlier not wanted to‚ out of respect for Sredojevic‚ I sent the recording of the phone interview to the journalists on Sunday night. Some apparently wrote reports on it.

It was on Saturday night‚ too‚ that the infamous Sunday World poster: “Sex scandal tackled Micho”‚ started doing the rounds‚ arriving on my phone as I was trying to answer questions from Egyptian journalists.

The details of that story – that a charge of indecent exposure has been opened at Norwood Police Station‚ regarding an incident allegedly involving the coach attempting to force himself on a cleaner – are mind-blowing if there is any truth to the allegation.

Pirates’ administrative officer‚ Floyd Mbele‚ asked on Wednesday morning if Sredojevic had made any mention of the police case when he resigned on Friday‚ said: “No.”

Mbele said he could not expand on the “personal reasons” Pirates had given as a reason for Sredojevic resigning‚ nor did he want to speculate on why the coach had left the country so suddenly.

“What I can tell you is the same thing I told Sowetan‚” Mbele said‚ “which is that Micho has left Pirates‚ and now‚ like any other coach who leaves the club‚ he is a closed book to us.”

I did contact Sredojevic again on Tuesday night to ask him to explain the report in the Egyptian media where either he‚ or someone representing him‚ claimed he had not spoken to me on Saturday morning.

“Which comments I denied I didn’t speak to any media except you‚” Sredojevic replied.

Pressed on where the report had then emerged from‚ he asserted: “I don’t know as my club here doesn’t allow me to speak to local media here.”

Of course‚ had the interview been given to the reporter from Filgoal.com it would have been on Saturday morning‚ before Sredojevic signed with Zamalek on Sunday.

And he did give an interview to me on that Saturday. Which he‚ or someone close to him‚ also apparently denied giving. Or he did not deny it‚ and the Egyptian journalist made that story up?

Such a tangled web of denials woven would have bewildered the writer of the famous poem.

Sredojevic is one of Africa’s most respected coaches.

He may not have won a trophy in two years at Pirates‚ but he restored them to being a competitive force when they had fallen from grace.

Let’s hope that’s the only reason to remember him in coming years now he has left.