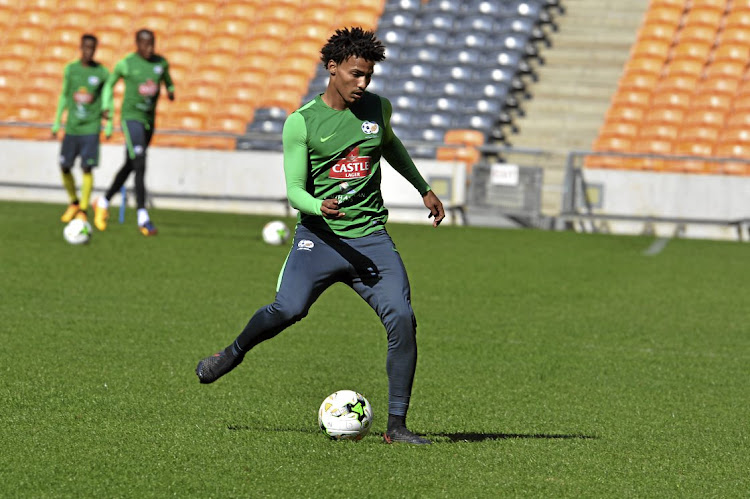 Pitso Mosimane is confident of securing an overseas transfer for Rivaldo Coetzee but the Mamelodi Sundowns coach says the move has a greater chance of success if the player is sold as a midfielder rather than as a defender.

Coetzee delivered a near perfect performance in his new number six role as the Brazilians began the defence of their Absa Premiership title with a 2-0 win over SuperSport United on Saturday.

“He’s got quality and I think as a number six he will go to Europe‚ but I am not sure as a centre-back where he is going to come up against big boys like Romelu Lukaku‚” said Mosimane.

“He must stay as a number six and he will go to Europe.

"If scouts come to watch him play‚ he will go to Europe.

"He should not stay here‚ but it needs the people who manage his career to market him and put him out there.

“It is the same thing I did with Pa Gaxa at SuperSport United where he was playing with Kaitano Tembo at centre-back.

"I told him you can play at centre-back and get away with it in SA but if you want to play for Bafana Bafana and go overseas‚ you should play right-back and deal with the big boys.

"He played in the World Cup in the starting line-up as a right-back and from there he went to Europe.”

Mosimane has overseen the transfers of several players to Europe over the years‚ including the likes of Keegan Dolly‚ Bongani Zungu and Percy Tau.

The Sundowns coach was impressed with Coetzee in the win over United where he allowed Kekana to go forward more and take his trademark shots at goal.

“I looked at the way they play because I am with them every day at training and I could see that when Rivaldo plays centre-back he only lose one or two balls.

"I said let’s stress him a little bit and put him in the midfield and see if he is going to make any mistakes and he just plays football.

“He doesn’t lose the ball‚ he passes with ease and he covers the left and right well.

"He is just a good football player and he is only 22 going for 23 and a future Bafana player.

"I wanted to correct him at training but he doesn’t give me a chance to do that because what are you correcting.

"He is a talent and a marvel to watch.

“We are pushing Kekana more forward because he shoots and he has the pass and we are also looking after him.

"We need Kekana and I don’t want him to be defending and going all over the place.

"I am managing him the same way I am doing with Wayne Arendse because age is not on their side.”