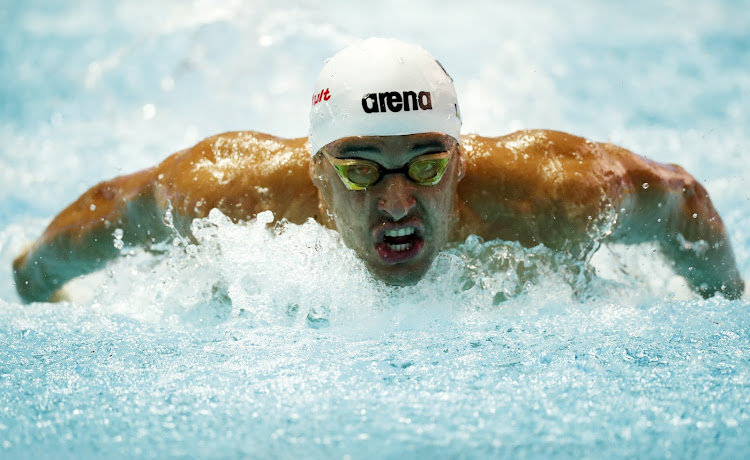 Chad Le Clos‚ struggling with a groin hernia‚ predicted a tight battle against trash-talking youngsters as he began the defence of his 200m butterfly crown at the world championships on Tuesday.

The 27-year-old won his heat in Gwangju‚ South Korea‚ in 1min 56.17sec to be fifth fastest overall heading into the evening semifinals.

Le Clos has struggled with a long-standing groin injury that ultimately forced him to stop racing the individual medley‚ aggravated by the breaststroke kick.

It was finally diagnosed a few weeks back as a hernia‚ which might require surgery after the championships.

“But I feel good‚ I don’t make excuses‚ as you know. And I come for these young guns‚ you know. They are talking a lot of trash and we’ll see.

“Next year I’ll get them for sure. This week will be very close‚” added Le Clos‚ without mentioning who had said what.

“I think a bit of slow morning for everybody‚ but happy to get through‚” added Le Clos.

“Comfortable being fifth for tonight. Just got to make the final and then have a crack‚ roll of the dice‚ see how we go.”

In other events‚ World Student Games silver medallist Michael Houlie went 27.41 in the 50m breaststroke heats to miss out on a spot in the semifinals.

The 26.82 Universiade record the US-based Capetonian cracked earlier this month would have ranked him fourth fastest in the heats as opposed to the 19th spot he actually achieved.

Cape Town schoolgirl Rebecca Meder was 30th overall in the women’s 200m freestyle in 2:02.70‚ but even her 2:00.82 best wouldn’t have been good enough for the semifinals‚ potentially elevating her only to 26th.