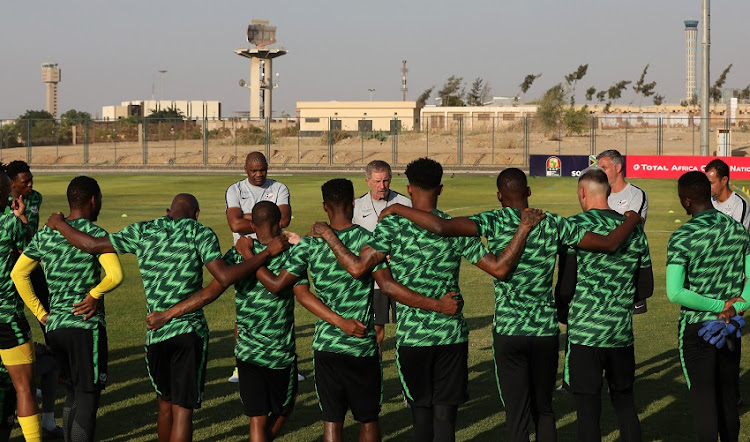 Bafana Bafana coach Stuart Baxter has cautioned his players to keep grounded‚ and remember what a quality team Nigeria are as his side face the Super Eagles on Wednesday night's Africa Cup of Nations quarterfinal at Cairo International Stadium (kickoff 9pm).

It is not often you will see a situation of a coach of South Africa having to caution his side against overconfidence ahead of a clash against nemesis team Nigeria‚ who have held a long‚ easy domination over Bafana.

But Bafana's 1-0 shock of hosts Egypt at Cairo International on Saturday night‚ and the quality of it‚ which has had Nigeria coach Gernot Rohr playing mind games calling South Africa now tournament favourites‚ has made this a match that the Super Eagles will be justifiably wary of.

Nigeria have not beaten South Africa in five matches.

They suffered their first competitive loss against Bafana‚ 2-0 in Uyo in June 2017 in the first qualifier for Egypt 2019‚ and drew 1-1 in Johannesburg.

Baxter was at pains to point out in his pre-match press conference that Bafana need to remember that they have only ever beaten Nigeria once competitively‚ and the three-time champions will be tough opponents.

"One of the really important things is for us to remain very humble‚" the coach said.

"If you look back not so long ago‚ then we wouldn't be overconfident going into a game against Nigeria.

"The Nigerians are still one of the powerhouses on the continent. We've had a very good result on Saturday and the boys played well.

"Yes‚ we've done OK against Nigeria in the past. And I think the question for us is do we tweak our way of playing a little bit?

"The way we have played against Nigeria before has worked quite well. On the other hand we played very well the other evening [against Egypt].

"So we've got to think about that one. But we should be under no illusions that Nigeria are one of the best teams on the continent.

"They've had a stable team with this squad now under Gernot for quite a while. And it will be a massively difficult game for us."

Baxter and Rohr are on friendly terms from their encounters against each other in the qualifiers.

Rohr confirmed on Tuesday he had SMSed Baxter information on Libya ahead of South Africa's must-win final qualifier in Tunisia in March.

The German coach has been in charge of Nigeria for a month short of three years.

Such longevity with the Super Eagles‚ who he guided to the 2018 World Cup in Russia‚ is impressive alone and an indication of the commendable job the intelligent 66-year-old has done.

It will be an interesting battle of wits on the sidelines on Wednesday night.