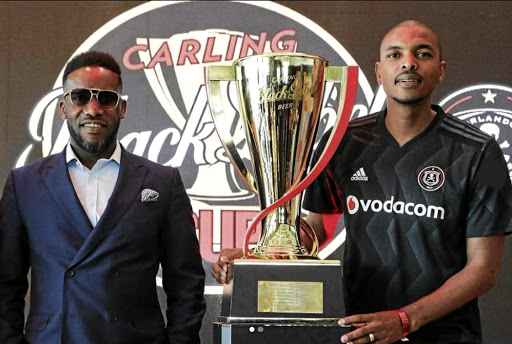 However, Okocha will be praying that Lorch isn't in his element when Nigeria and SA rekindle their long-standing rivalry in the Africa Cup of Nations quarterfinal tie at Egypt's Cairo International Stadium tomorrow (9pm)

"We are aware of his threat, he's a player that I like. I like exciting players," Okocha, who boasts over 70 caps for the Super Eagles, said of Lorch.

Lorch is the talk of the town after netting a solitary strike that sent the hosts, Egypt, packing, inspiring Bafana to the last-eight at the weekend.

On the other hand, Nigeria earned their berth in the quarterfinals through beating defending champions Cameroon 3-2 in the last-16 earlier on Saturday.

As much as he speaks fondly of Lorch, Okocha is aware that Bafana still have another threat in Percy Tau. The 45-year-old legend expects Lorch and Tau to carry the hopes of SA together going forward.

"Of course, we have to respect the opponents' key players. Especially those who are having a good tournament, I mean it's obvious that in the Bafana Bafana squad the threat was just Tau until Lorch was introduced," Okocha said.

The family of Bafana Bafana star Thembinkosi Lorch buried his "closest" uncle just hours before he scored a goal that put SA into the quarter finals ...
Sport
2 years ago

"It's like they are sharing the responsibility now going forward. You have two players who can cause problems for any team and I am sure we [as Nigeria] are aware of that."

The ex-Paris Saint-Germain and Bolton Wanderers gem was part of the Super Eagles team that outwitted Bafana 2-0 on home soil in the 2000 Afcon as they co-hosted that continental showpiece with Ghana.

"It was great [facing Bafana] because before then I was personally looking forward to play against Bafana as we had been having this argument that we are the best African team.

Okocha, who's in SA doing punditry job with television channel SuperSport, explained why it was no-brainer to upset Bafana back then.

"It was a bit easier for us to beat Bafana because we were home. So it'll be interesting seeing both teams playing against each other in a neutral ground [in Egypt tomorrow]."