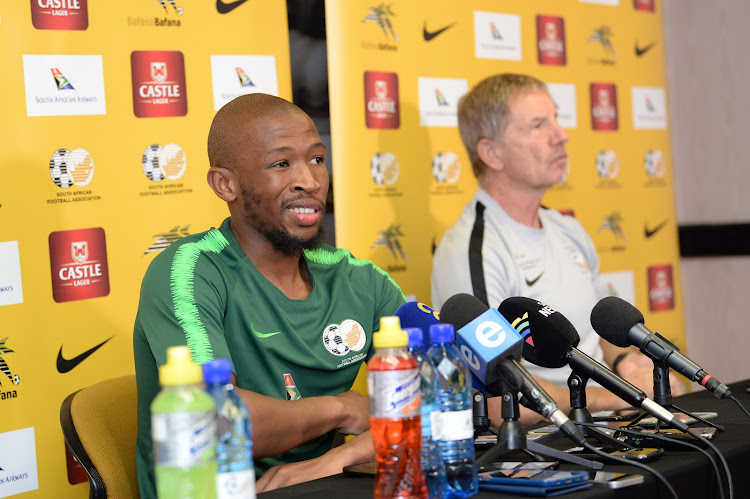 England-based Kamohelo Mokotjo is convinced that Bafana Bafana will negotiate their way past the Africa Cup of Nations group stages and surprise many in Egypt later this month.

The Brentford midfielder acknowledged that the poor performances of several SA national teams have not been encouraging but he insisted that they remain focussed on their own mission in Egypt.

“We are only focussed on ourselves‚” said Mokotjo‚ who had a good season with Brentford in the English Championship where he played 34 league games and scored three goals.

“Of course the negatives of the other national teams affect us as well‚ but going to the Afcon we’re very positive that we can go past the group stages and after that we’ll see how far we can go.”

Coach Stuart Baxter is set to trim his preliminary squad from 27 players to the final 23 this weekend and Mokotjo said no one in the camp is assured of a place on the plane to Egypt as competition for spots heats up.

“The players are in good form and we’ve all just ended our seasons and we’re looking good. For now we’re preparing and it is intense.

“Everyone knows that they have a shot of making it to the final squad. So no one is taking it easy and thinking that they deserve a spot.

“It’s a big tournament and right now Bafana needs players that are tuned to what the coach wants and are at the level of the tournament.”

The 28-year-old midfielder said he remains calm ahead of the challenge and even the tournament debutants in the team are also forward to this new chapter in their careers.

“It’s a new generation for some of us and it might be our last time‚” he said candidly.

"But we are focussed on the here and now and the goal is to go there and perform and go as far as possible in the tournament.

“If we are undermined it’s possibly to our advantage because we know how well we can play if we do what’s required.

“I think I have been waiting for my opportunity and I have not just been hoping and waiting that by luck I would get a chance.

“I have been working hard to be in the place that I am in right now. But every camp is different and every game is different

“Now it’s a major tournament and the goal is to get myself in the team‚ and if I do‚ help the country go as far as possible in the tournament.

“I honestly believe that we can do well but we all need each other as players and as staff.

‘‘So this is where it all starts and I think we have a good situation here.

“We have good players and a good technical staff. Once this comes together in a week or so‚ then I think everyone will be speaking more confidently of our chances.”

Mokotjo didn’t train with his team-mates on Wednesday morning but he said it was just a precaution.

“I was feeling a bit stiff and the camp will be long. So sometimes you just need to pace yourself.

“The technical staff decided to protect me a little bit‚ and I’m grateful for that.”

Bafana fly out to Dubai on Monday where they will play a friendly against Ghana.

Baxter said another preparation match would possibly be against Angola in Egypt a few days before they open their campaign against Ivory Coast in Cairo on June 24.