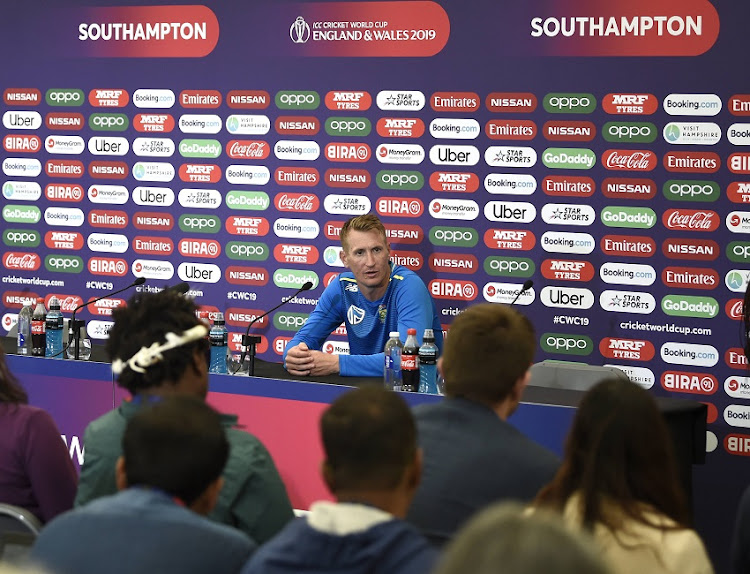 South Africa player Chris Morris speaks to the media after the Group Stage match of the ICC Cricket World Cup 2019 between South Africa and India at The Ageas Bowl on June 05, 2019 in Southampton, England.
Image: Stu Forster-IDI/IDI via Getty Images

Chris Morris was left to reflect on cricket’s unfairness after South Africa stumbled to unprecedented depths at the World Cup on Wednesday.

India beat them by six wickets to complete a hattrick of defeats: the first time South Africa have lost their opening three games in the eight editions of the tournament in which they have featured.

“Unfortunately‚ they didn't land for us.”

Between them‚ Morris and Kagiso Rabada garnered three chances in the first three overs of India’s reply to South Africa’s modest total of 227/9.

All three fell to earth‚ and instead of being 5/3 and in deep trouble India were able to sail on to victory with 15 balls to spare.

“The flip of the coin landed on the Indian side‚ unfortunately‚ with the few opportunities that came our way.

“And when the ball lands in no-man’s land like that in the first five overs three times it is quite difficult.

“The opportunities were there. Unfortunately‚ it didn't go for us today. We created our chances.”

Morris’ figures of 10-3-36-1 were the most economical in the tournament this year.

Before he completed his quota‚ Rabada was in pole position with his return of 10-1-39-2.

Rohit Sharma’s 122 not out sealed a comprehensive victory for India over South Africa in their Cricket World Cup match in Southampton on Wednesday.
Sport
3 years ago

“The guys are very disappointed and a bit angry‚ which they are allowed to be‚” Morris said‚ suggesting feelings of injustice.

“We will sort that out in our heads tonight and when the sun comes up tomorrow we will go back to the drawingboard and take on our next opponent.

“So it is pretty simple — win the next six and crack on.”

South Africa need to win all of their remaining six games to be confident of reaching the semi-finals.

Anything less would likely make them dependent on the results of other matches going their way if they are to reach the final four.

That part of the journey starts when they play West Indies in Southampton on Monday.

What might South Africa need to turn their campaign around?

“Maybe a bit of luck‚” Morris said. “Maybe it will go our way. At the end of the day‚ we've got to play as well as we can.

“The guys in the team are some of the best in the world and we need to put our hands up and do it. It's pretty simple.”