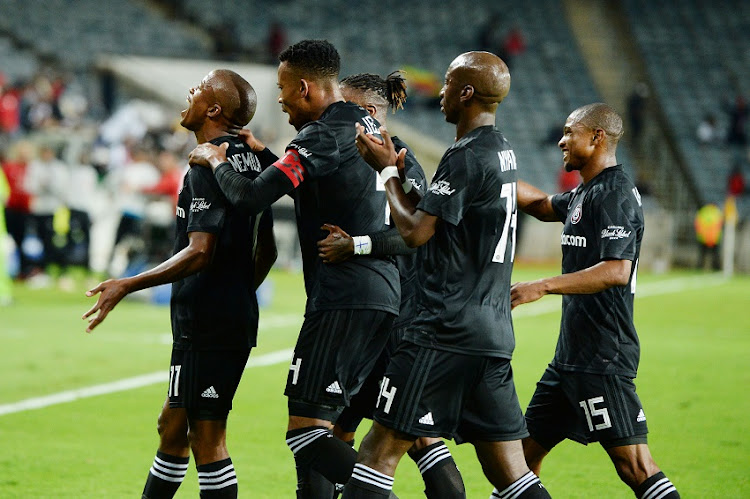 A wasteful Orlando Pirates still managed to pull three points clear at the top of the table with a comprehensive 2-0 win over Black Leopards on Wednesday as they look to make a dash for the Absa Premiership title glory.

Winger Luvuyo Memela’s exquisite curling free-kick over the wall from the edge of the box put Pirates ahead midway through the first half and Thembinkosi Lorch’s sixth goal of the season in the second half put a final nail in the visitors’ coffin at a chilly but jovial Orlando Stadium in Soweto.

It’s back-to-back wins now for the Buccaneers following their 1-0 away victory over Bidvest Wits at the weekend and they will aim for a treble of wins and stretch their lead at the top to six points on Saturday when they welcome Free State Stars at the same venue.

The narrow scoreline is not a true reflection of the match as the Buccaneers outplayed and outfoxed Leopards in every department. Such was Pirates’ dominance over their struggling visitors that Memela, Lorch and Thabo Qalinge could have each bagged a brace.

Pirates goalkeeper Wayne Sandilands was hardly called into action as the Sea Robbers buccaneered over their struggling visitors.

The Buccaneers could have ended the match as a contest in the first half had it not been for their myriad of missed chances and they should have won by a cricket score given the gilt-edged chances that they continued to create throughout the match.

Pirates, on 47 points from 26 matches, now have a three-point advantage over title rivals and defending champions Mamelodi Sundowns, who have 44 points but have played two matches less than Bucs.

Although Pirates have played two matches more, the pressure is now on the Brazillians to convert their games in hand into points.

A match in hand is like a man in the jungle and you never quite know what the eventuality may be.

By the time Sundowns play their next league match at home to SuperSport United on Wednesday April 17, Pirates could have pulled six points clear at the top should they win away at Free State Stars four days prior.

Despite a pair of brilliant saves from to keep the otherwise relaxed Sandilands actove, one in each half, Leopards never really pushed Pirates.

The Limpopo side did not look like a side that wanted to improve from a 3-1 hammering they got at the hands of provincial rivals and this season’s surprise package Polokwane City at the weekend.

For Leopards, who host Kaizer Chiefs in Thohoyandou on Saturday, another defeat and unfavourable results elsewhere could see them sucked into the relegation mire.

The Limpopo side remain in a spot of bother in 12th place on the log. On 25 points from 24 matches, they are just a point away from danger.