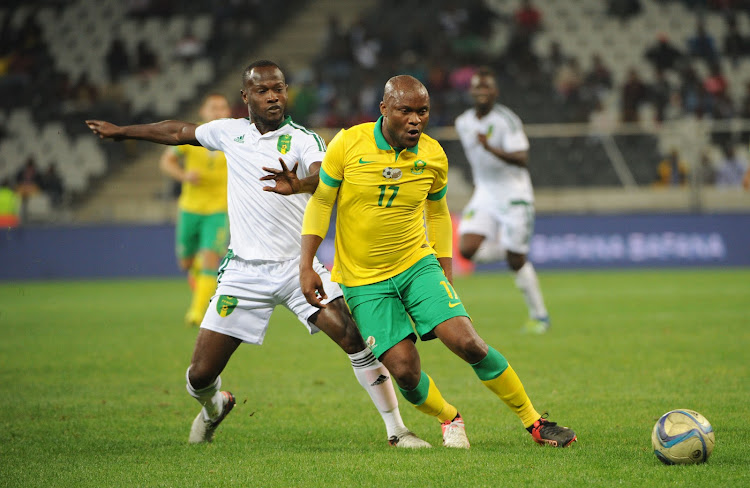 Tokelo Rantie of South Africa is challenged by Khassa Camara of Mauritania during the AFCON Qualifier match between South Africa and Mauritania 02 September 2016 at Mbombela Stadium.
Image: Sydney Mahlangu/ BackpagePix

Tokelo Rantie has been secretly training with Mamelodi Sundowns over the last two weeks and appears to be close to getting another chance to resurrect his career after leaving Cape Town City under a cloud three months ago.

The former Bafana Bafana marksman has been sidelined for more than a year‚ first taking himself into self-imposed footballing exile and then‚ after joining City in mid-year‚ his career was marred by personal problems.

City attempted to get him fit to return the field but gave up after a few months.

But Sundowns appear to have handed him another lifeline with coach Pitso Mosimane interested to see whether Rantie can pull his life back together and make a successful return to the field.

Insiders confirmed to SowetanLIVE that Mosimane has asked City why they let the 28-year-old player go after a few months.

City chairman John Comitis did reflect on Rantie’s exit three months ago‚ giving some insight into what went wrong with the attempt to restart the career of the ex-Bafana striker.

“Tokelo’s issues are personal to him and I don’t think (talking to the media) is the right platform for us to be discussing it‚” Comitis said at the time.

“We are still in the background supporting Tokelo and we haven’t completely cut off ties with him. We are basically trying to see what a solution could be.

“In everybody’s career at some point they go through some difficult patches. Some challenges are harder than others and we need to respect that and give him some space.

“He’s a great player and I would love to see him back in South African football‚ but at this stage I’d like to leave it at that.”

Rantie has not played since October 2017 after walking out on his club in Turkey and forgoing a lucrative contract.

He told Genclerbirligi he had to go home for a relative’s funeral and never returned‚ amid reports of personal problems.

He has since been involved in a messy divorce.

His time on the sidelines saw him put on significant weight but City offered him a chance to return by giving him a contract.

Rantie trained with the club for a few months and was put on a series of special diets and training programmes‚ but club insiders say his personal problems finally got the better of him.

Just two years ago‚ Rantie was the star of Bafana’s sensational away win in Nigeria at the start of the 2019 African Nations Cup qualifying programme.