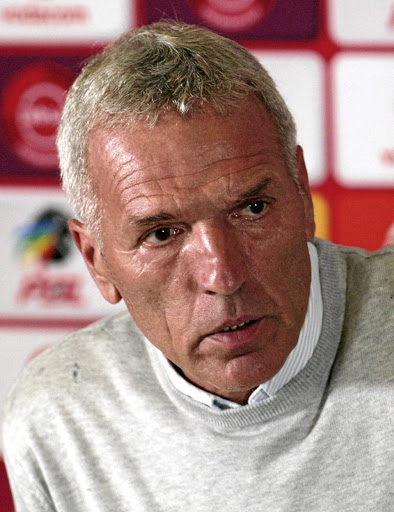 Kaizer Chiefs coach Ernst Middendorp’s representatives have put forward a plea agreement in his Premier Soccer League (PSL) disciplinary committee case regarding various comments he had made just over two years ago.

SowetanLIVE sister publication TimesLIVE is informed that the plea deal‚ entered into with PSL prosecutor Nande Becker‚ has to be confirmed by the DC.

This relates to various statements Middendorp made in late 2016‚ when‚ in a public running battle with acting PSL CEO Mato Madlala‚ the then-Maritzburg coach had insinuated that the conflict had resulted in refereeing decisions going against the KwaZulu-Natal team.

His return to the PSL to take the reigns at Chiefs on December 9 resulted in the charges from the league’s DC.

Ernst Middendorp’s representatives have put forward a plea agreement in his PSL DC case regarding comments he had made just over two years ago.
Sport
3 years ago

Middendorp on Thursday appeared not to know about a plea deal that has been entered into‚ and indicated that Chiefs are handling the DC matter on his behalf.

“No‚ that’s not my duty. I only made my point. And I said sorry in particular to a certain person‚” Middendorp said.

“The club is supporting me in a very productive way and I’m very thankful about it.”

The coach‚ however‚ did express his regret for the comments he made while he was coach of Maritzburg.

“In this moment a lot of stuff went wrong. In 2016‚ probably‚ I was too excited at that time with certain messages‚” Middendorp said.

“I punched into the air. Ja‚ very well‚ I think actually now let’s be grown up. And the biggest one who has to be grown up is me‚ in this direction.

“I made that statement [then]. It’s not out of everything – it’s just that my statement in the moment [that I made] is there.

“I fully understand and respect the authority of this DC committee.”

Middendorp quit as Maritzburg coach in late November 2016. He joined Bangkok United in early December of that year.