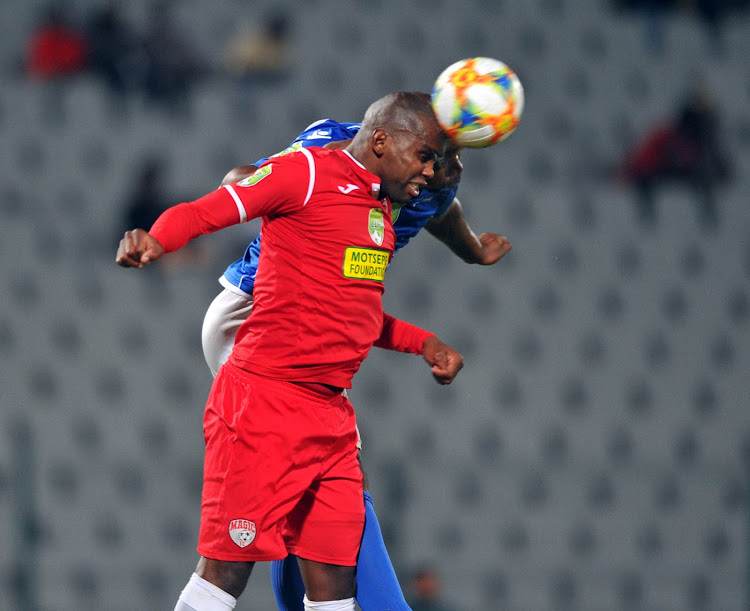 The Magic FC captain Tshepiso Tlhapi (in red) says his teammates are ready for whatever challenges they will face against South Africa's Cup kings Kaizer Chiefs.
Image: Sydney Mahlangu/ BackpagePix

The Magic FC captain Tshepiso Tlhapi will have a special reason for wanting to do well in Sunday’s Nedbank Cup last 16 clash against Kaizer Chiefs … he is a former Orlando Pirates player!

Tlhapi‚ a junior international‚ used the surname Tshabalala earlier in his career and featured for Pirates in the 2007/08 season before later turning out for Bloemfontein Celtic and Thanda Royal Zulu.

At the age of 32‚ he is relishing the opportunity to face the AmaKhosi in the twilight of his career‚ something he did not manage in a competitive match while in the Premier Soccer League.

“I have played with some of the Chiefs players before‚ I was with Itumeleng Khune for the national Under-23 side. I also played against Chiefs in the Telkom Charity Cup when I was at Pirates‚” Tlhapi says.

“Some of us like Thando Mngomeni have played Chiefs before and we have been telling the other guys not to be scared. It is the same as facing any other team‚ just put in the hard work and focus.”

Tlhapi says the players have been putting in extra effort in training this week in order to be selected for what is the biggest game in the club’s history.

“All the guys are putting in the hard work at training and we are looking forward to it‚” he says.

“It comes down to each and every player‚ everyone has their own objective and for those that want to play at a higher level‚ it is a great chance.”

Tlhapi adds that while they will take heart from the struggle Chiefs had in beating Tornado FC in extra-time in the last round‚ it will also likely refocus Ernst Middendorp’s side as to the task at hand.

“What Tornado did … we know we can do it.

"But Chiefs will also know that it will not be easy against us after that Tornado experience. I think they will put more effort into this game.

“But the longer it takes for them to score against us‚ the more frustrated they will get. That could be key.”