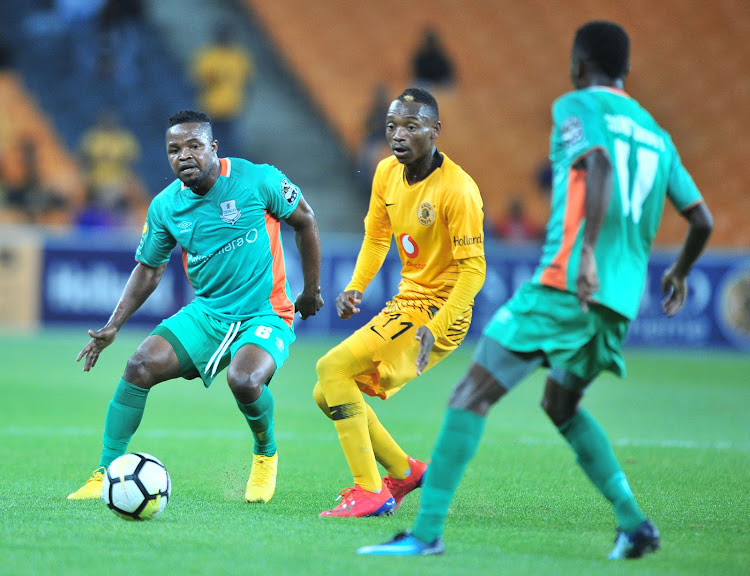 Kiazer Chiefs forward Khama Billiat tries to get away from his markers during a 2-0 Caf Confederation Cup defeat at home against Zambian side Zesco United at FNB Stadium in Soweto on Saturday January 19 2019.
Image: Samuel Shivambu/BackpagePix

Kaizer Chiefs' players talked big during the week about putting up a fight to reduce the two-goal deficit from their 3-1 first-leg defeat against Zesco United in Zambia.

Instead they weakly conceded two more at homeat FNB Stadium on Saturday night, then scored a late consolation in a 2-1 second-leg loss to exit in the Caf Confederation Cup playoff round by a 5-2 aggregate scoreline.

Teddy Akumu in the 10th minute and Jessy Were in the 69th sealed the win for the vastly more polished and experienced Zesco, with Khama Billiat pulling a goal back for Chiefs in the 94th.

Needing a clear home leg victory, it seemed strange that Chiefs coach Ernst Middendorp switched from the 3-5-2 formation with attacking wingbacks that has brought Amakhosi goals in all their games this year, opting instead for a more static 4-4-1-1.

Daniel Cardoso at right-back made for a solid back four in terms of not conceding, but limited Chiefs' attacking options.

Lebohang Manyama, influential recently in central midfield, was out with a knock as Khama Billiat made a return in attack and George Maluleka replaced Kgotso Moleko, Middendorp making two personnel changes from a midweek 3-2 away league win against AmaZulu.

Zesco, the losing 2016 Caf Champions League semifinalists against that year's winners Mamelodi Sundowns, have greater recent continental experience than Chiefs. As in the first leg, it showed.

The Zambian club defended effectively, and took the chances they gained from a counterattack that was effective through the strong running of classy forwards such as Lazarous Kambole and Were.

Chiefs, after the early goal sloppily conceded, never looked overly-keyed up for the fight needed for three goals to take the game to penalties.

With the financial and physical expenses involved in reaching a Confed Cup group stage, and their domestic struggles already this season, perhaps that was not surprising.

If Chiefs had intentions of attacking Zesco in the first half to begin to reduce the deficit, they had to not concede.

But they did, and softly, in the 10th minute to basically hand the tie to Zesco.

A minute earlier the much-improved Hendrick Ekstein showed his growing confidence as he drove sweetly, but high of goalkeeper Jacob Banda's crossbar.

But Ekstein remains an imperfect player. He was loosely protecting the ball that Akumu far too easily took off the Amakhosi playmaker to run through and shoot hard and low. Goalkeeper Virgil Vries seemed wrong-footed and got down clumsily to allow in Zesco's opener.

Whether the goal took the wind from Chiefs' sails, or they just did not quite have the stomach to fight back, their response was not impressive.

It was Zesco's strong front-runners who continued to look dangerous, and Chiefs' buildups were slow and ineffective.

Cardoso managed a chip into the area that Leonardo Castro won, but with the top of his head. Kambole's drive for Zesco was inches wide.

Middendorp did switch back to a 3-5-2 from the break. Dax replaced Castro and went to right wingback, while Kabelo Mahlasela came on for Teenage Hadebe, and Willard Katsande dropped into a back three with Mario Booysen and Cardoso.

Katsande won a header from Banda that fell for Cardoso to have a shot blocked. Siphelele Ntshangase also came off the bench, for George Maluleka. Vries then turned Akumu's low, swerving strike for a corner.

After an intricate buildup, Bernard Parker's cross was missed by Billiat under the attention of Banda, and Mahlasela could only connect a knee in front of an open goal.

Chiefs were upping the ante in attack, and pressing numbers forward - a situation ripe for a killer goal from Zesco.

Katsande allowed a ball up-field from Banda to bounce, then lost it to Kambole, then recovered for the challenge. The loose ball was easily swept past Vries by Were.

Ntshangase's long pass was beautifully taken on his chest and swept past Banda by Billiat in the fourth minutes of added time.

Dozens of boys living in dire conditions have been rescued from a "church" in Johannesburg after being recruited by a "coach" who told their parents ...
News
3 years ago